"...daily experience satisfies us that bloodletting has a most salutary effect in many diseases, and is indeed the foremost among all the general remedial means..."

In the fifth century B.C., Hippocrates established a unified theory regarding the etiology of various diseases that subsequently influenced medical care for centuries.  In his proposed rules of harmony, he taught that all body systems were represented by four humours which were naturally balanced and that disease was a result of an interruption in those relationships. Bleeding has been practiced since the time of the Egyptians, and was a way of balancing those humours. 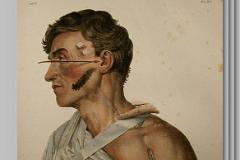