For there was never yet philosopher

That could endure the toothache patiently.

Physicians and healers of all sorts have always been interested in the diagnosis and treatment of disorders of the teeth and gums because of the ubiquitous and urgent nature of the problem. Dental disease has been found in human remains from as early as the Stone Age, and it was in the seventeenth century that skulls began to show a significant increase in the rate of dental caries as the importation of inexpensive sugar from the New World increased. Soon after that dentistry began to evolve into the profession that it is today. 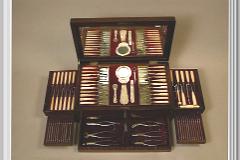