He must begin first in youth with good learning and exercise in thys noble arte, he  also must be clenly, nimble handed, sharpe sighted, pregnant witted, bolde spirited, clenly apparailed, piteful harted, but not womanly affectionated to wepe or trimble, when he seeth broken bones or bloodies woundes, neither muste he geve place to the cries of his sore patiente, for soft chyrurgians maketh fowle sores. Of the other side, he maie not plaie the partes of a butcher to cutte, rende or teare the bodie of mannekynde. For although it be fraile, sore, and weake, yet it is the pleasure of God, to cal it his Temple, his instrument, and dwelyng place.

For thousands of years, those who practiced surgery were perceived more as craftsmen than as professionals, and it was not until the last few hundred years that surgeons were considered “physicians.”

The Gross Clinic (1875) by Thomas Eakins
Professor Samuel Gross was one of the most prominent surgeons of the nineteenth century and was the chairman of surgery at the Jefferson Medical College from 1856 to 1882. He was an extremely important American surgeon, author, and medical teacher, and his two volume System of Surgery (1859) provided a basis for surgical techniques used during the Civil War. Unfortunately, Dr. Gross remained one of the last major medical figures of the nineteenth century to be unconvinced by the monumental discoveries earlier that century regarding asepsis, as seen in this famous painting.
Picture Gallery 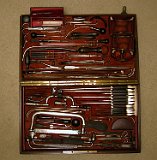