The practice of medicine is an art, not a trade, a calling, not a business, a calling in which your heart will be exercised equally with your head.

Physicians were unable to enter the head, chest, and abdomen in a meaningful way for millions of years, so they resorted to an almost endless variety of medications to treat conditions that often proved to be fatal. It wasn't until the discovery of anesthesia and the investigative use of the scientific method in the middle of the nineteenth century that healthcare providers became truly effective.

Aesculapius, the Roman god of medicine (a second century marble bust)
Asklepios was first mentioned in Greek literature in Homer’s Iliad as the father of two physicians, Machaon and Podalirius, both of whom served in the siege of Troy in about 1180 B.C. As the stories of his great medical prowess grew, Asklepios’ legend took on religious connotations. He was eventually thought of as a halfgod since his father was the Greek god Apollo and his mother was Coronis, princess of Thessaly. The Romans subsequently adopted Aesculapius as their god of medicine.
Picture Gallery 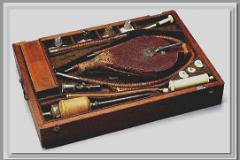