Prior to the aseptic era, by far the most commonly performed major surgical procedure was an amputation, which was also one of the earliest operations depicted in medical literature. 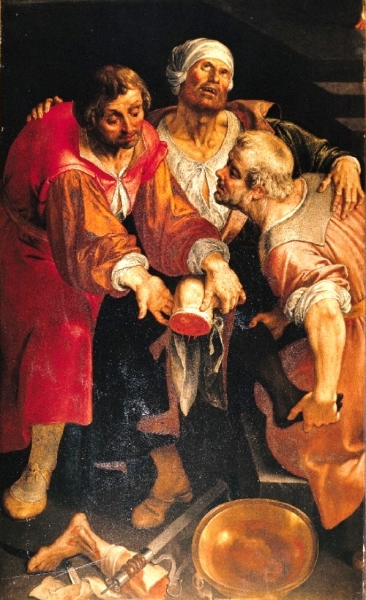 Saints Cosmas and Damian performing the miraculous transplantation of a leg (late sixteenth century) by Ambrosius Francken
Cosmas and Damian were prominent Arab twins who converted to Christianity and traveled about Persia, freely giving their medical services to the needy. Unfortunately, however, the brothers were tortured and beheaded during the reign of Emperor Diocletian (303 A.D.), though they subsequently became the patron saints of barber-surgeons as the legends of their medical and surgical accomplishments grew in time. They became famous following their legendary transplantation of the leg of a Moor. It seems that a Christian Roman deacon, Justinian, had a malignant growth on his leg and fell asleep while praying for a cure in the Church of Cosmas and Damian in Rome. In his dreams, the saints amputated the diseased limb and transplanted the leg of a Moor who had been brought to the church for burial. The patient awoke and gratefully observed a now healthy leg, though black in color.
, 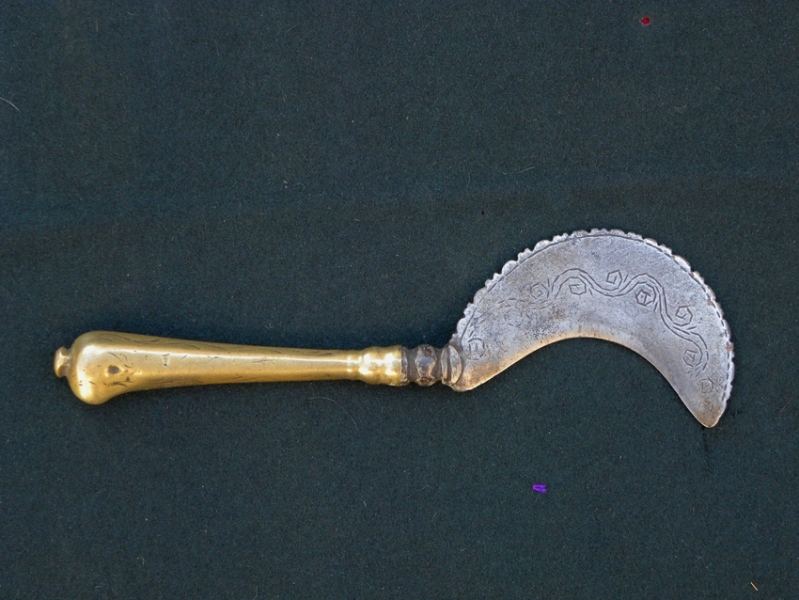 amputation saw
This very primitive (Italian?) amputation saw was probably 13th century or earlier. Unfortunately there are no hallmarks for specific identification.
, 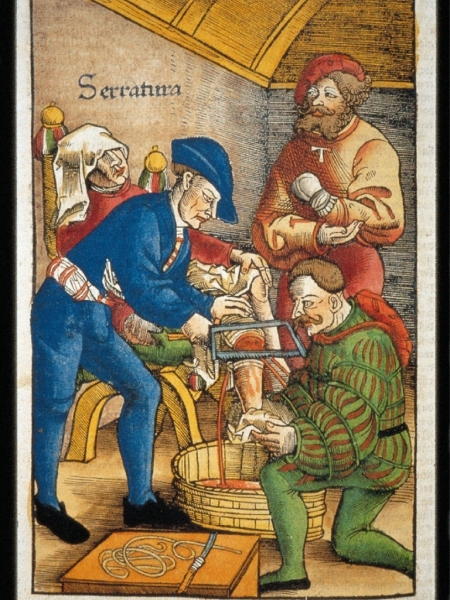 Feldbüch der Wundartzney (1497) by Hans von Gersdorff
In the illustration by the famous German surgeon Hans von Gersdorff (ca 1480-1540), note that the physician was using his left hand as a tourniquet to both reduce bleeding, and to compress the nerves for pain control. The man on the right of the illustration was wearing a “T,” likely indicating that he suffered from St. Anthony’s Fire, which was probably erysipelas, a Group A streptococcal infection common at the time.
, 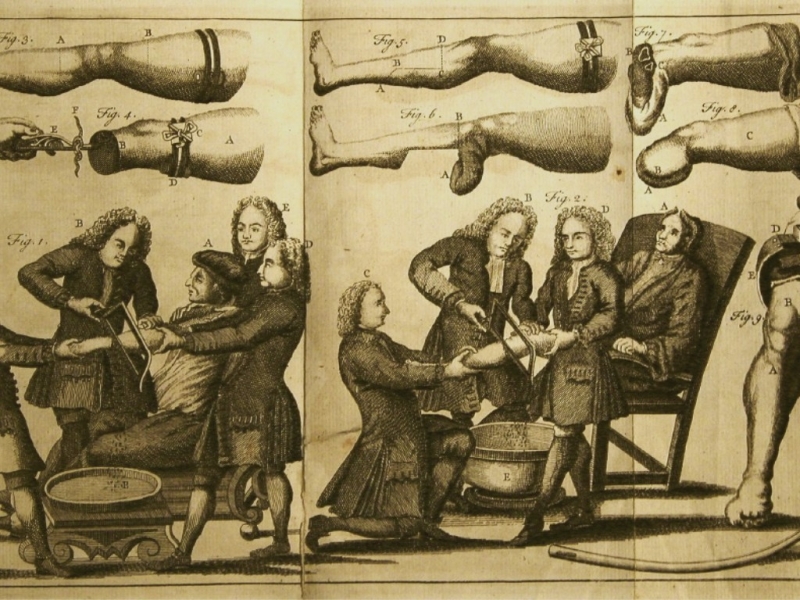 A General System of Surgery (1743) by Laurence Heister
The removal of a limb was the last surgical resort, and the most dramatic surgical procedure prior to the discovery of anesthesia in the middle of the nineteenth century. The pain and fear must have been beyond description, and patients often had to be held down by several assistants.
, 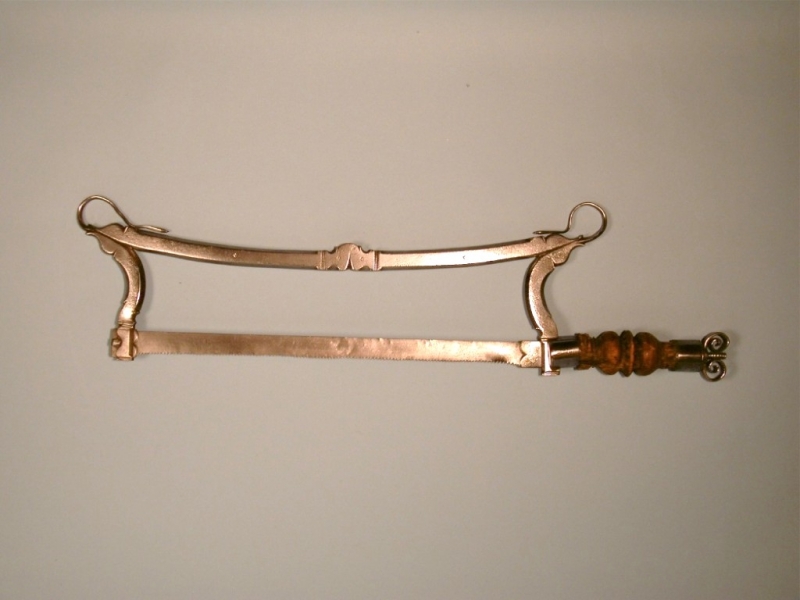 Large (24 1/2-inch) German amputation saw (ca. 1540)
The hooks at either end of the saw would allow the surgeon to hang up his instrument in plain sight for the admiration of potential future customers.
,

Perrot saw (ca. 1770) by Spear & Sagnson
a later amputation saw in the same style that would have been in use by surgeons during the French Revolution
, 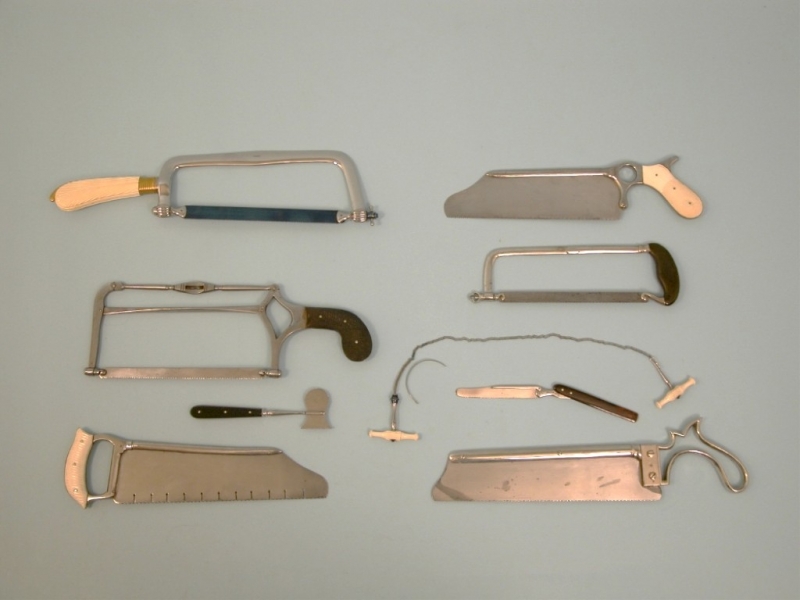 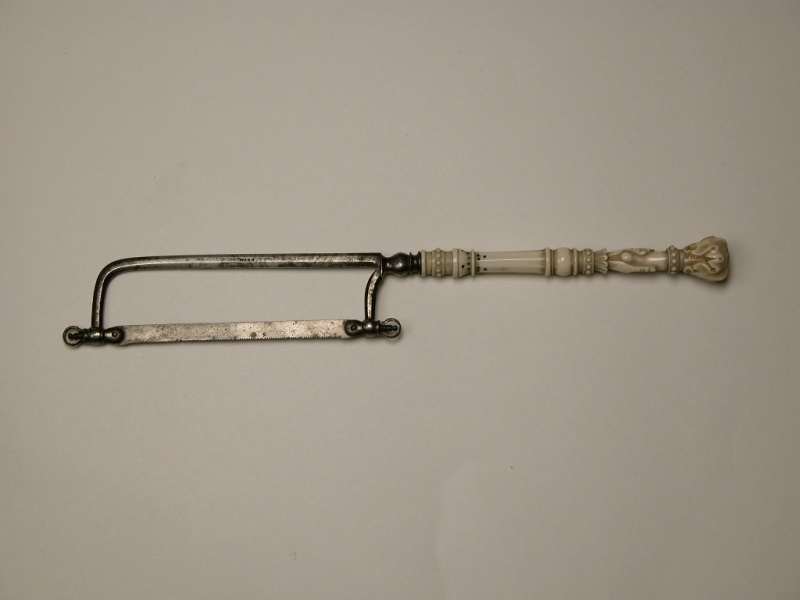 metacarpal saw, ca. 1800
This decorated ivory handeled metacarpal saw is unique and may have been part of the instrument collection of a physician to royalty. It's ironic that such a magnificently handcrafted instrument was designed to remove digits.
, 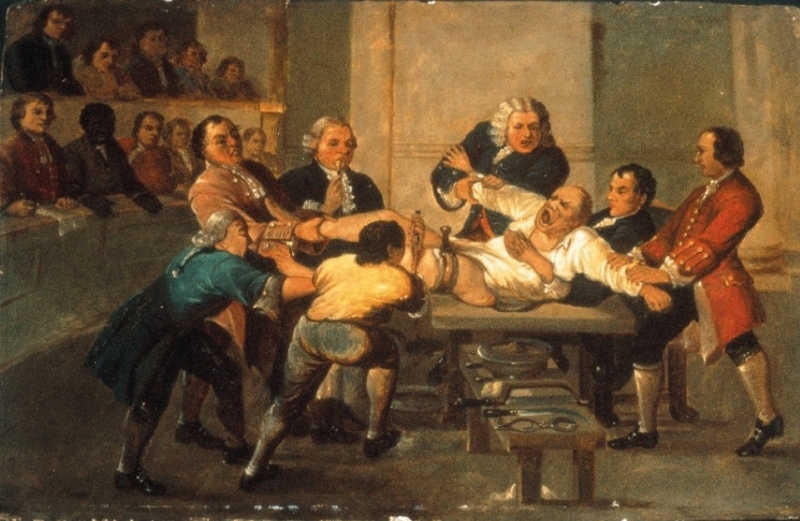 oil on board by an unknown artist, mid nineteenth century amputation
amputation with several attendants holding down the patient and students observing the procedure
, 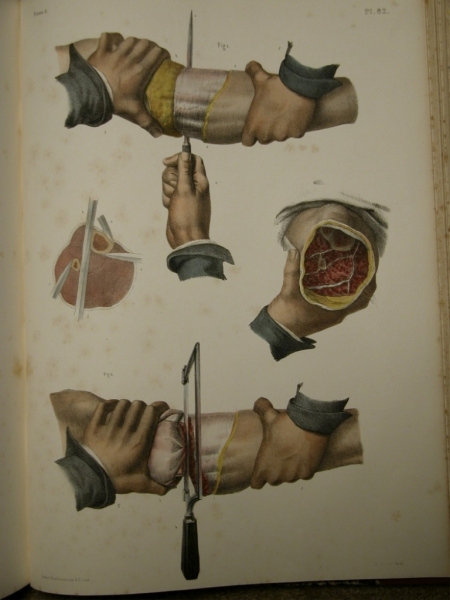 Traité complet d’anatomie de l’homme, 2nd ed. (1866–1871) by J.M. Bourgery, Claude Bernard, and N.H. Jacob
The earliest method for amputation was the circular technique, first described by Aulus Cornelius Celsus (25 B.C.-50 A.D.). Military surgeons preferred this technique because the wound healed quickly, and there was less soft tissue to be exposed to the possibility of infection. Additionally, circular amputation resulted in less operative pain, and patients could be transported with fewer complications.
, 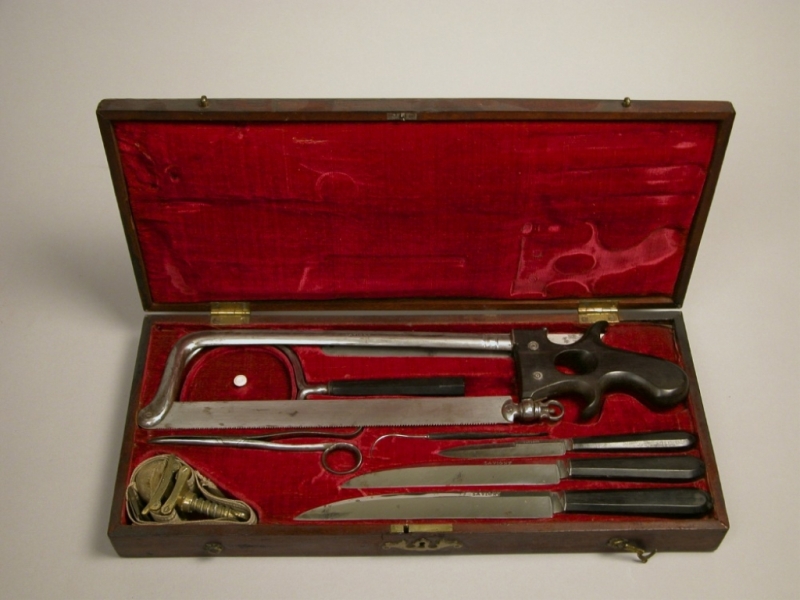 British circular amputation set (ca. 1770) by Savigny
Savigny was the preeminent British manufacturer of surgical instruments in the eighteenth century.
, 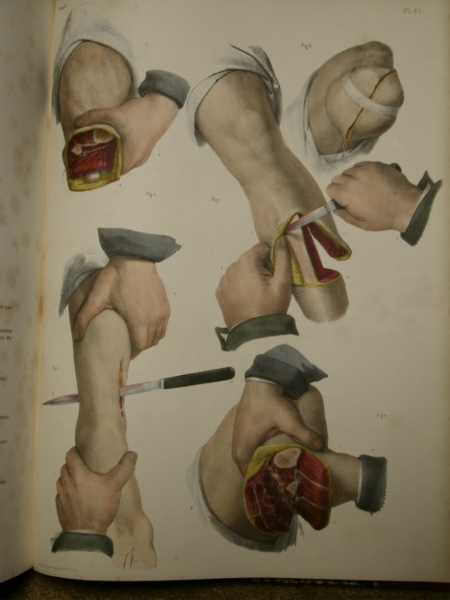 Traité complet d’anatomie de l’homme, 2nd ed. (1866–1871) by J.M. Bourgery, Claude Bernard, and N.H. Jacob
James Yonge (1646-1721) was the first to describe the flap amputation, a later method that was faster, and was associated with less postoperative pain than the circular technique.
, 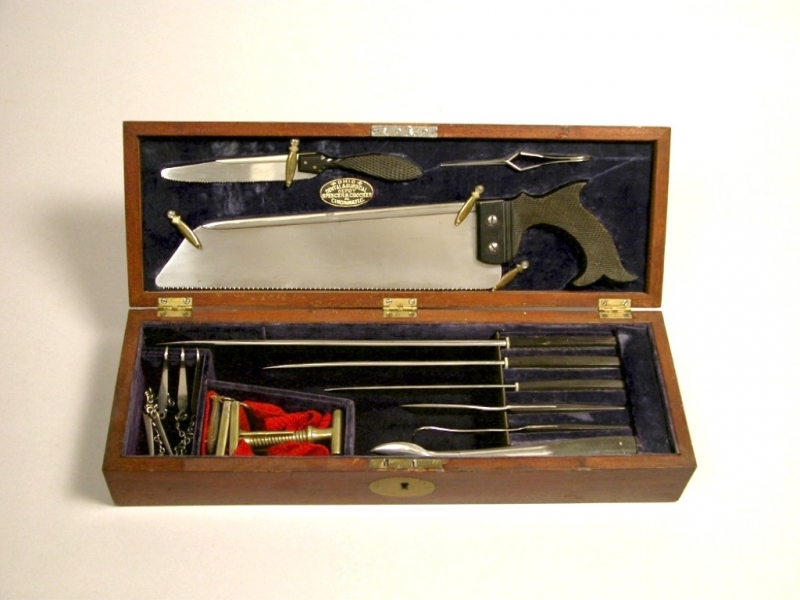 amputation set (ca. 1870) by Spencer and Crocker
This set could have been used for the flap or circular techniques and would have been tyical for those used by surgeons during the Civil War.
, 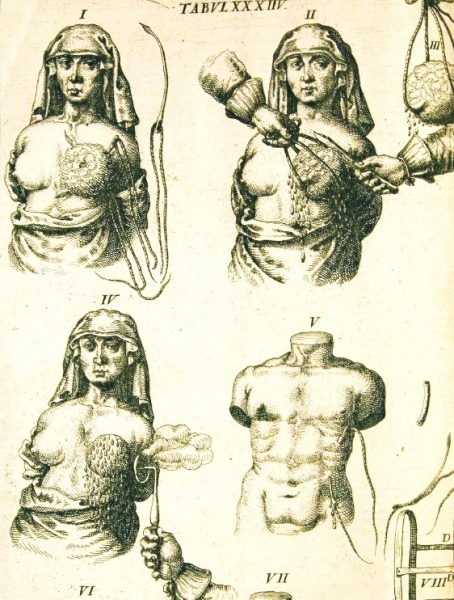 Armamentarium Chiruigicum (1655) by Joannis Scultetus
This is an illustration of an early mastectomy with the control of bleeding by cautery.
, 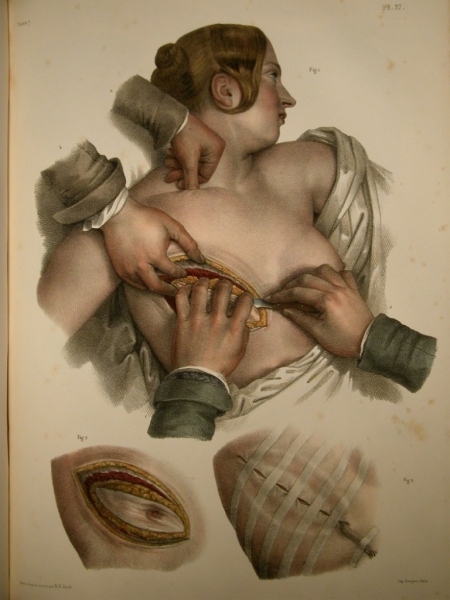 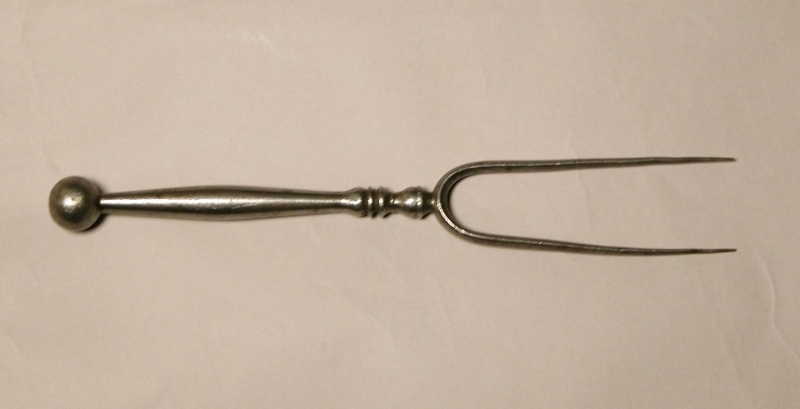 breast fork, mid eighteenth century
This instrument was used for the removal of a diseased breast and is extremely rare.
, 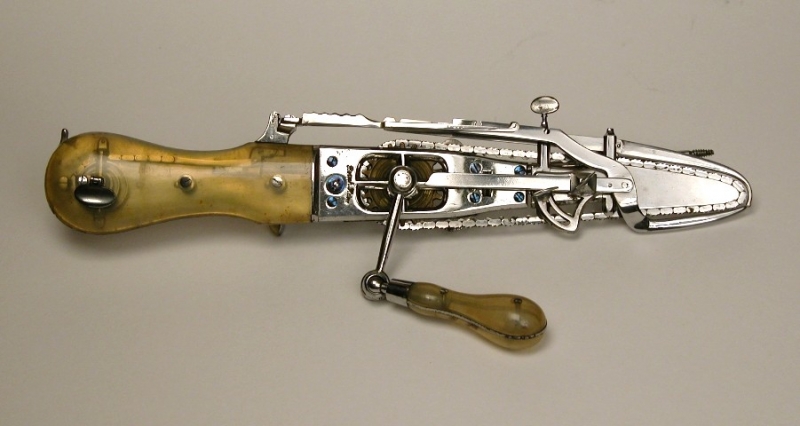 Heine’s osteotome (ca. 1840) by Heine
The Heine's osteotome was an early nineteenth century chain saw device used for the rapid separation of bone during an amputation. It has quite an intricate mechanism and thus not many have survived.
, 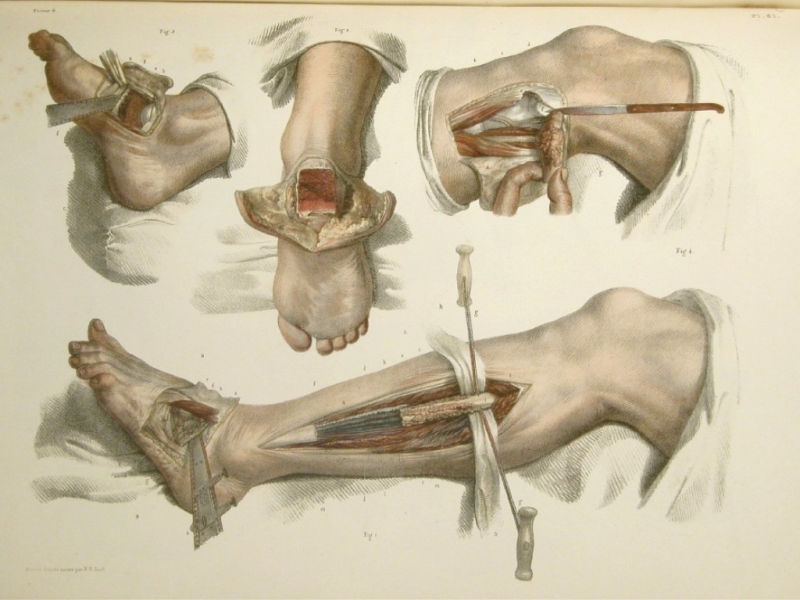 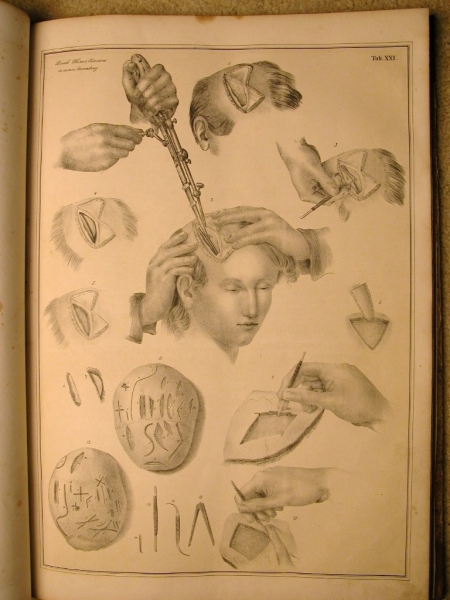 Charrière's catalogue of surgical instruments
another use of the Heine's osteotome
, 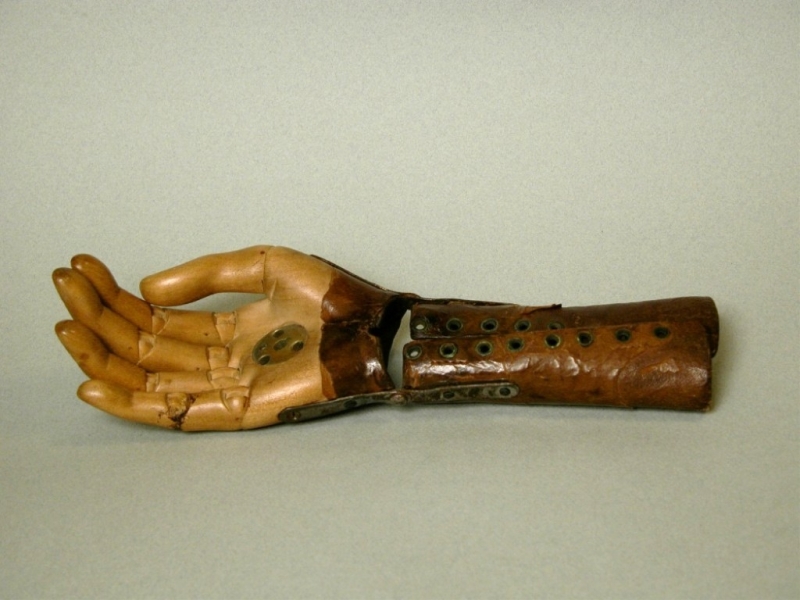