George Tiemann and Company was one of the leading medical instrument makers of the 19th and early 20th centuries. The company was founded by German immigrant George Tiemann in New York in 1826. Tiemann's fiftieth anniversary in 1876 was also a special time in US history since it marked the centennial of the signing of the Declaration of Independence. Other significant events taking place that year included the Battle of the Little BigHorn; Wyatt Earp became marshall in Dodge City, Kansas; "Wild Bill" Hickok was murdered in Deadwood, South Dakota; the Jessie James/Cole Younger gang ended when only Jessie and Frank James escaped an attempted robbery of the First National Bank of Northfield, Minnesota; all Native Americans were ordered on reservations; Bell patented the telephone; the first transcontinental train arrived in San Francisco from New York; and the Johns Hopkins University opened. The nation's centennial gave the United States an opportunity to show the world the progress that had been made after the first hundred years so the US hosted the World's Fair for the first time at the birthplace of the nation in Philadelphia. The Tiemann Company also marked their fiftieth anniversary at this event by manufacturing a very special and unique set of surgical instruments. This Tiemann set was displayed at the Fair in Philadelphia from May 10 through November 10, 1876. An extract from the General Report of the Judges states in part, "The largest collection of instruments was exhibited by Messrs. Tiemann & Co., of New York. It embraced almost every instrument used by the surgeon in general or special practice, and some entirely new. In material, workmanship and exquisite finish, they could not be excelled." 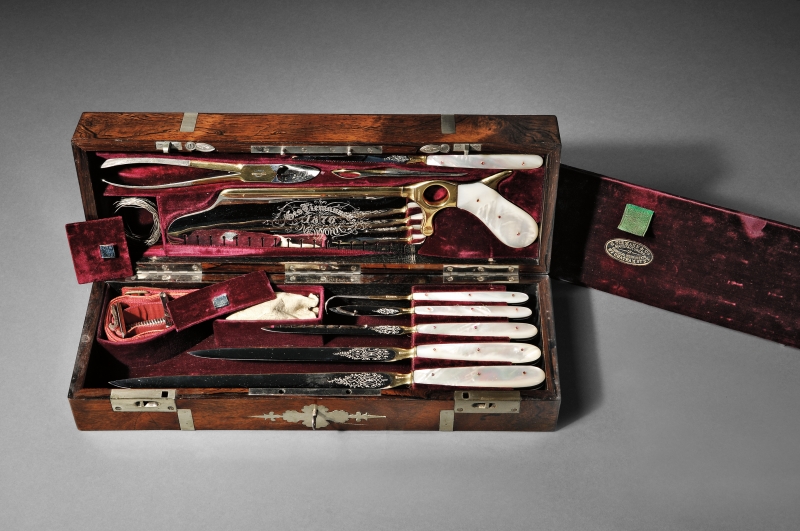 Tiemann Surgical Set
The set is heavily engraved with the handles made of mother-of-pearl with a total of 42 cut rubellite gemstones. (There is a small box hidden in the set containing 8 more rubellite gemstones for a total of 50 to represent the 50th anniversary of the company.) The blades are stainless steel and portions of the instruments have a 24-karat gold overlay. The set is in complete and unused condition.
, 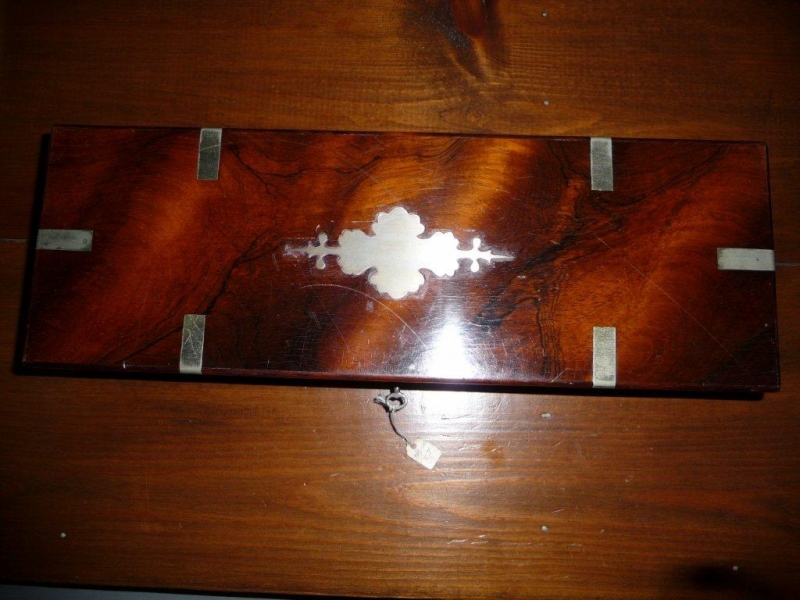 Centennial Set With Cartouche
The rosewood box has brass fittings with sterling silver cartouches on the top and the front.
, 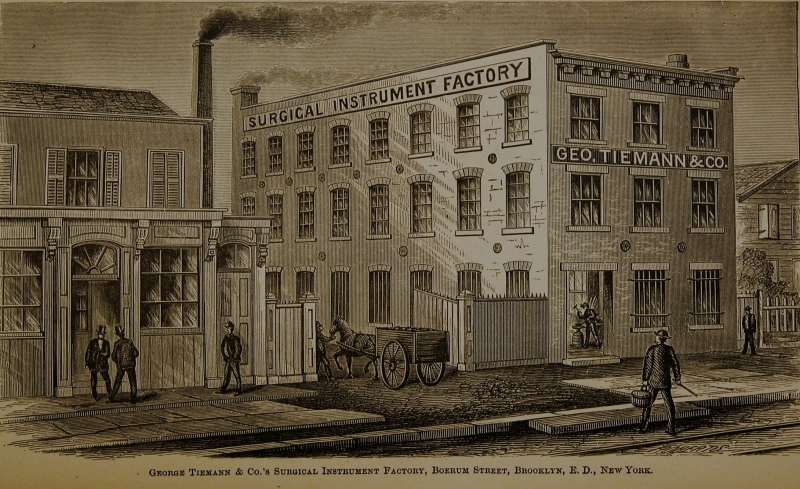 New York Tiemann Manufacturing Plant
The shop where the Centennial Set likely was manufactured (image is from the 1879 instrument catalogue).
, 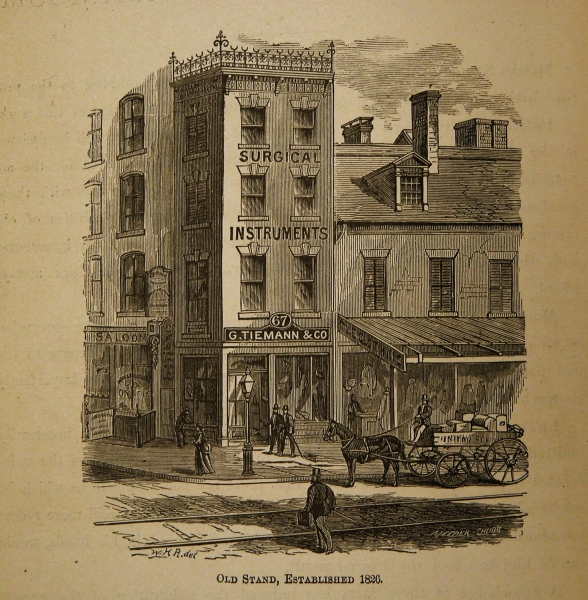 Tiemann New York Shop
Tiemann changed locations several times in New York in the 19th century but this is the shop where instruments made during the 1876 Centennial would have been sold (image is from from the 1879 instrument catalogue).
, 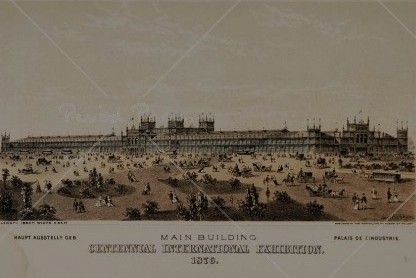 Main Building, 1876 Philadelphia World's Fair
The building in which the Centennial Tiemann Set was exhibited during the 1876 World's Fair.
, 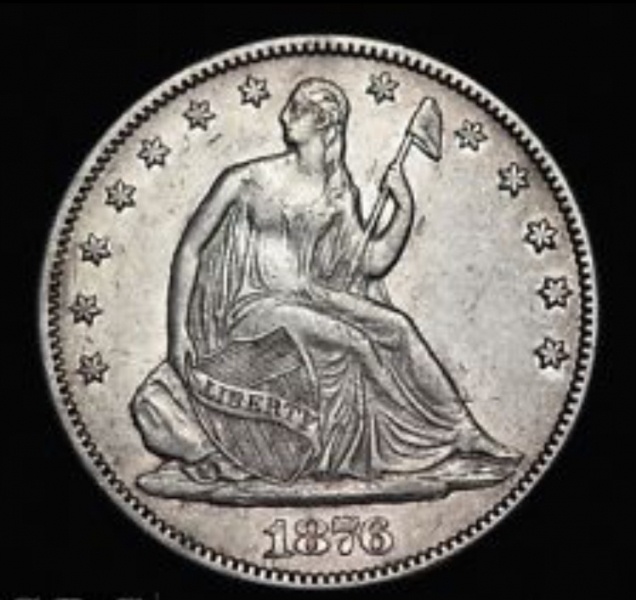 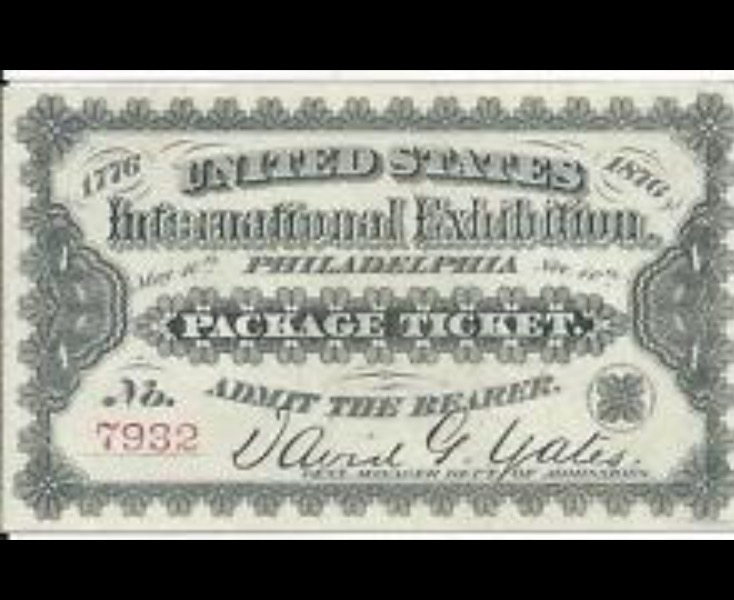 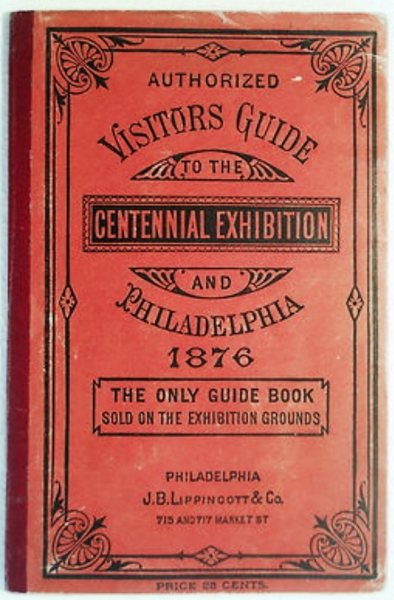 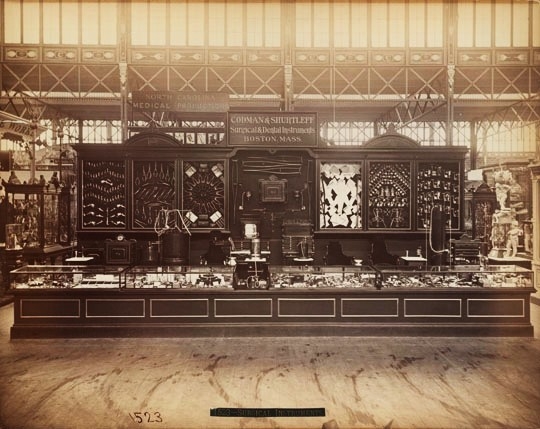 Centennial Exhibition by Codman & Shurtleff
This was a typical example of displays prepared by medical instrument manufacturers from around the world for the 1876 World's Fair in Philadelphia.
, 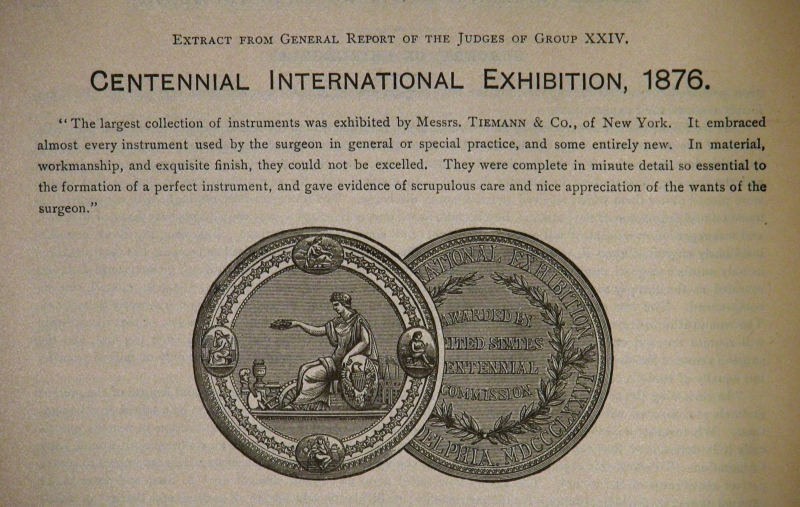 Centennial Medal
This notification appeared in the 1879 Tiemann Catalogue of instruments, acknowledging an award given to them for their participation in the 1876 World's Fair.
, 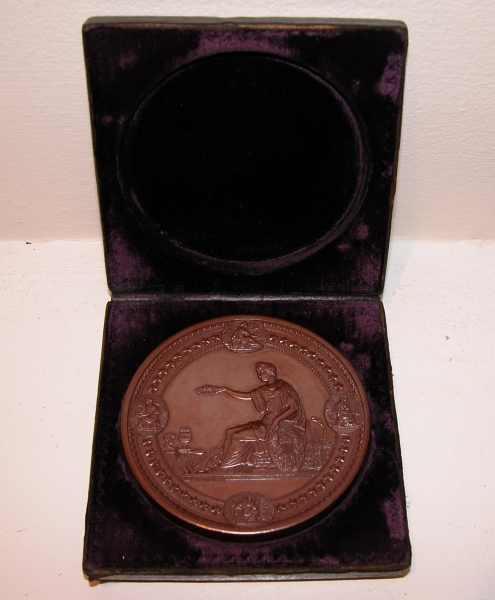 Centennial Medal
This bronze medal from the 1876 Centennial World's Fair in Philadelphia is identical to the one given to the Tiemann Company for their exhibition and the medal illustrated in their instrument catalogue.
Cased Surgical Sets The Control of Bleeding