Surgical procedures have been recorded from the earliest of times and art continues to be an important way of documenting the history of this specialty. 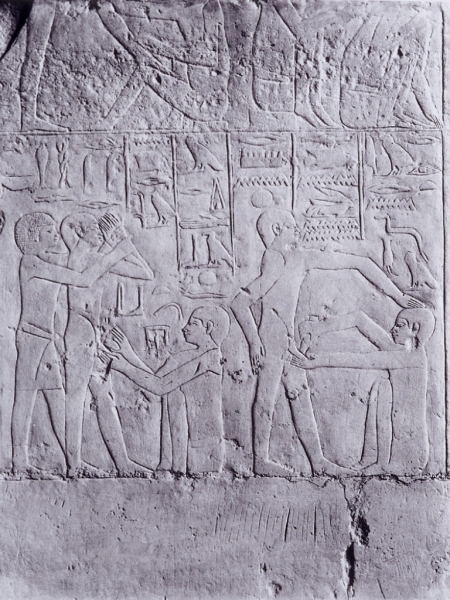 Egyptian circumcision: relief on the wall of a tomb at the Sakkara cemetery in Memphis, sixth dynasty (2625–2475 B.C.)
The earliest written representation of surgery is that found in Egyptian ruins and early papyri. A number of minor procedures are noted there, including the practice of circumcision, which is the first operation ever illustrated and was the only surgical procedure mentioned in the Bible (Exodus IV, 25), when Moses’ wife Zipporah, “took a sharp stone and cut off the foreskin of her son”. This relief was found in a cemetery in Memphis at the home of Imhotep, grand vizier to King Zoser (2980-2900 B.C.).
, 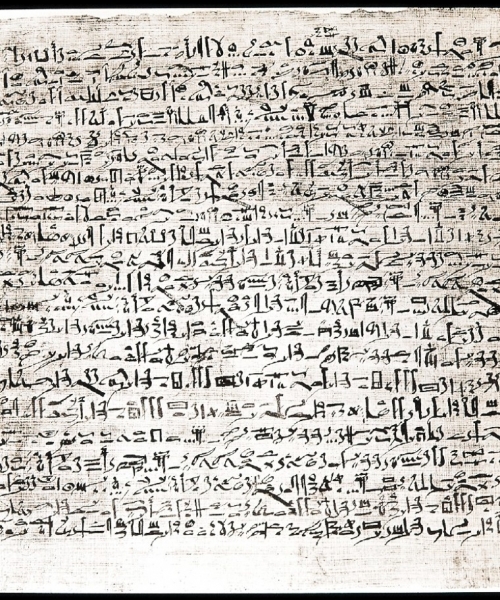 Edwin Smith Egyptian surgical papyrus (ca. 1600 b.c.), cases 9–12
In 1862, American Egyptologist Edwin Smith (1822-1906) discovered probably the most important Egyptian medical document yet found. The Smith Papyrus was written in about 1600 B.C., and reflects medicine as practiced as far back as the thirtieth century B.C. Smith discovered the manuscript in Thebes in 1862, and JH Breasted translated it in 1938. The papyrus contains text on both sides of a fifteen foot roll, and is made up of forty-eight individual surgical cases describing examinations, diagnoses, and methods of therapy.
, 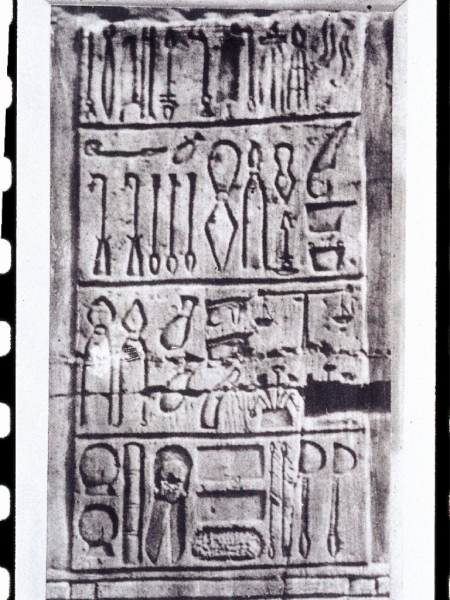 relief of Egyptian surgical instruments
These instruments were inscribed on the wall of the outer corridor of the Temple of Sobek and Horus built by Ptolemy VII, Kom Ombo, Egypt (181–146 B.C.).
, 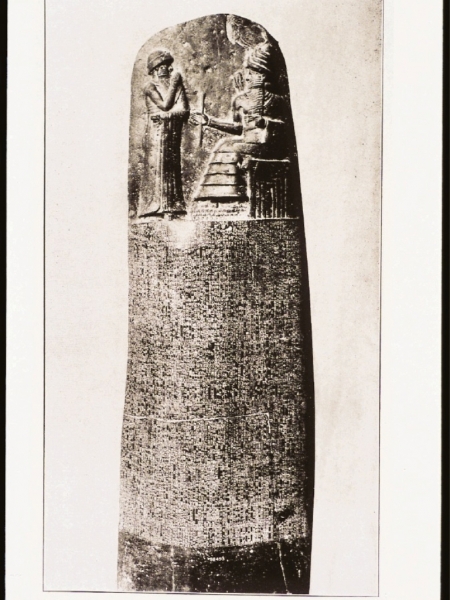 The Code of Hammurabi inscribed on black diorite rock (ca. 1780 B.C.)
Hammurabi ruled the Mesopotamian civilization of Babylon from 1792 to 1750 B.C., and was responsible for formulating the first recorded code related to medicine. This now famous Code of Hammurabi is housed at the Louvre in Paris, and represents an early effort to form a social structure based on law.
, 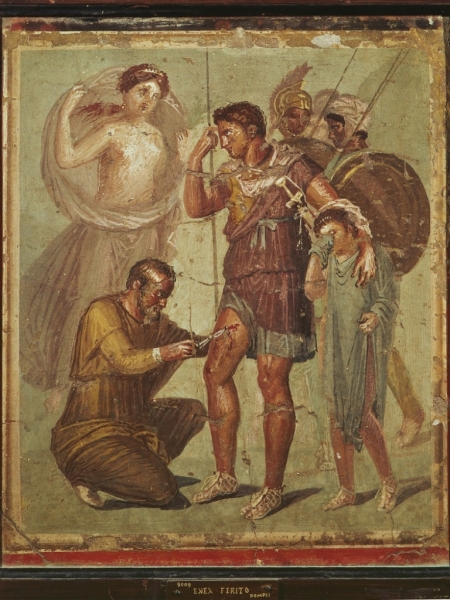 fresco from the Casa di Sirico, Pompeii, first-century
Aeneas (between Venus and Ascanius) being treated by a physician
, 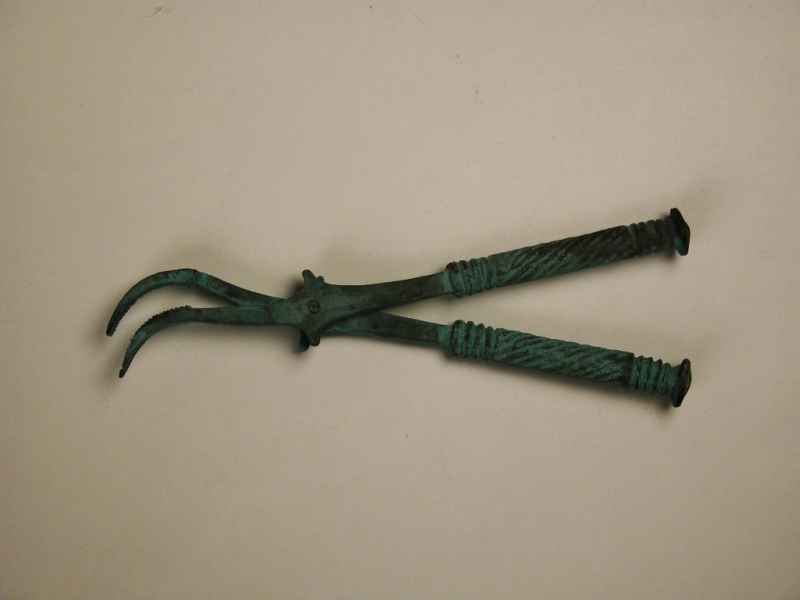 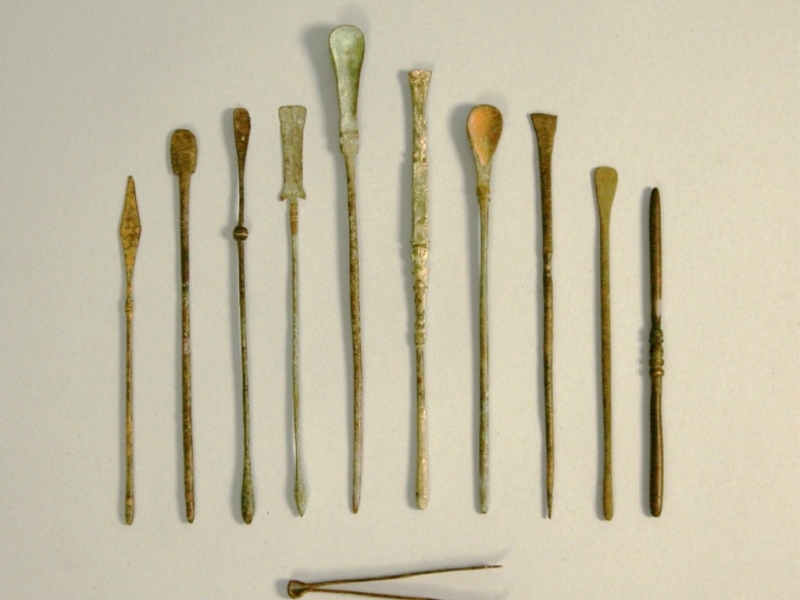 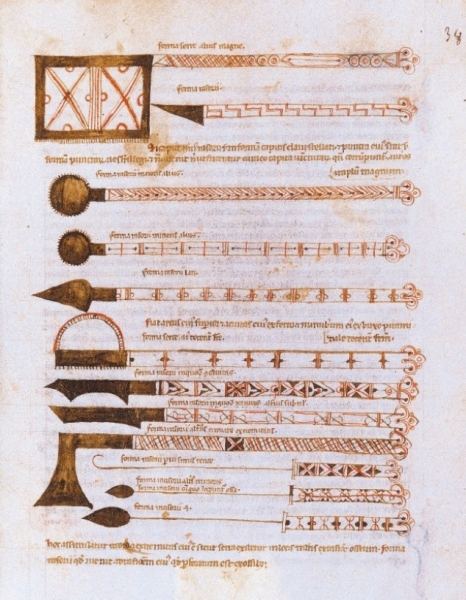 Altasrif (thirteenth century Latin translation) by Albucasis
Al-Zahrawi (Albucasis) (936-1013) was a surgeon of Spanish/Arab descent, and became a major figure in the history of medicine with his comprehensive and systematic review of surgery, the Altasrif. It was referred to by physicians for hundreds of years, and was translated into Latin, providing the basis for all future European surgical writings. Albucasis carefully and thoughtfully described more than fifty surgical conditions, including bloodletting, midwifery, urinary diversion into the rectum, reduction mammoplasty, tracheotomy, craniotomy, and lithotomy. Illustrations of surgical instruments were the first to be seen in printed form in the Altasrif.
, 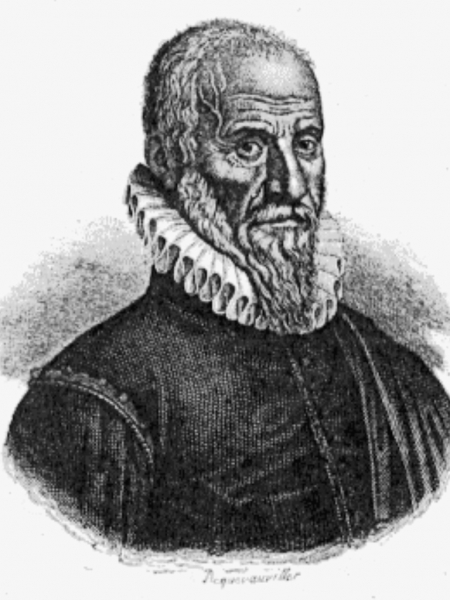 Ambroise Paré (1510-1590)
Ambroise Pare (1510-1590) is considered by many to be the first great modern surgeon, and he was responsible for raising his profession in France from a level of scorn and ridicule to one of admiration and esteem. He was the son of a barber-surgeon, and was thereby exposed at an early age to minor surgical procedures performed by those without a formal medical background.
, 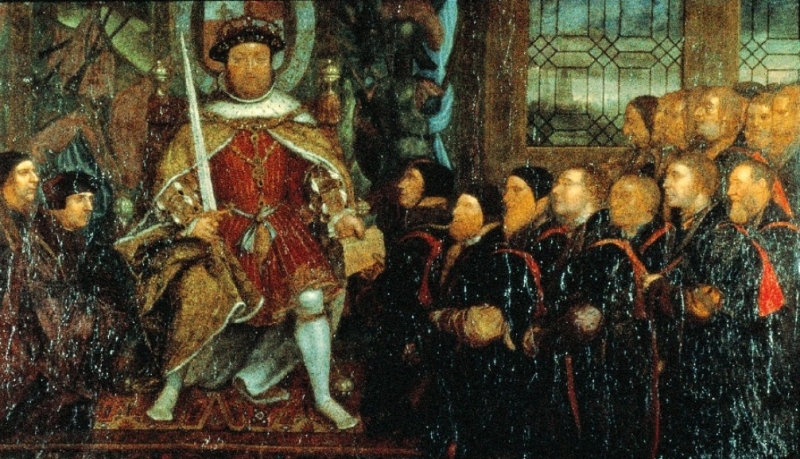 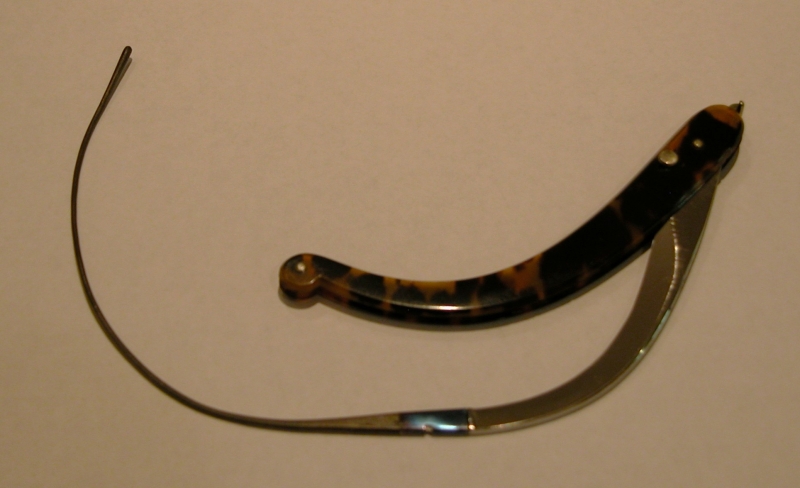 rectal repair lancet
French King Louis XIV was troubled by a rectal fistula. An instrument similar to this was used by barber-surgeon Charles-François Felix to accomplish the repair. The only other example is the instrument that was used, now located at the medical museum in Paris.
, 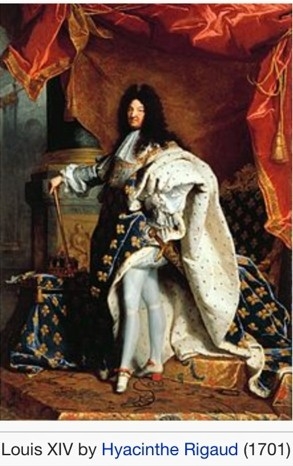 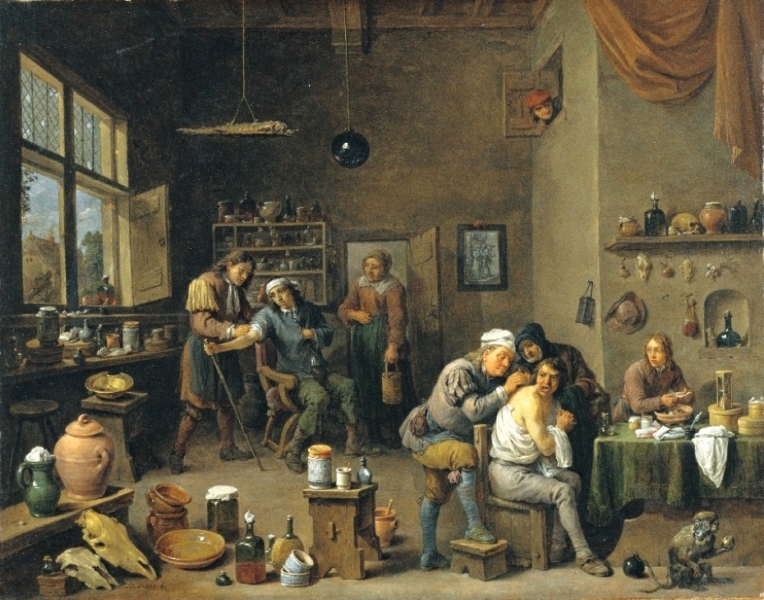 The Surgeon oil painting on canvas by David Teniers the Younger (1610–1690)
This painting illustrates some of the procedures performed by seventeenth century barber surgeons, including bleeding and lancing boils.
, 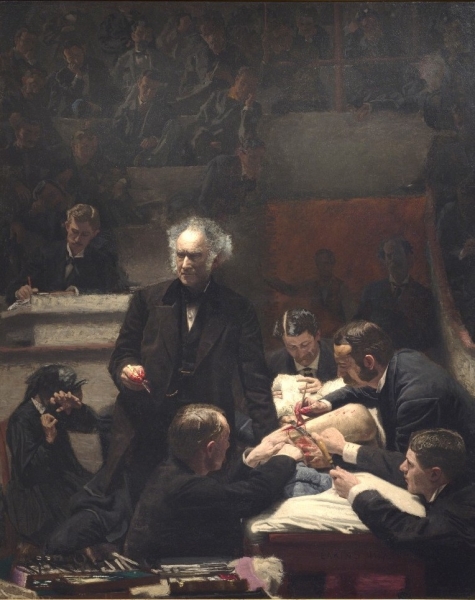 The Gross Clinic (1875) by Thomas Eakins
Professor Samuel Gross was one of the most prominent surgeons of the nineteenth century and was the chairman of surgery at the Jefferson Medical College from 1856 to 1882. He was an extremely important American surgeon, author, and medical teacher, and his two volume System of Surgery (1859) provided a basis for surgical techniques used during the Civil War. Unfortunately, Dr. Gross remained one of the last major medical figures of the nineteenth century to be unconvinced by the monumental discoveries earlier that century regarding asepsis, as seen in this famous painting.
, 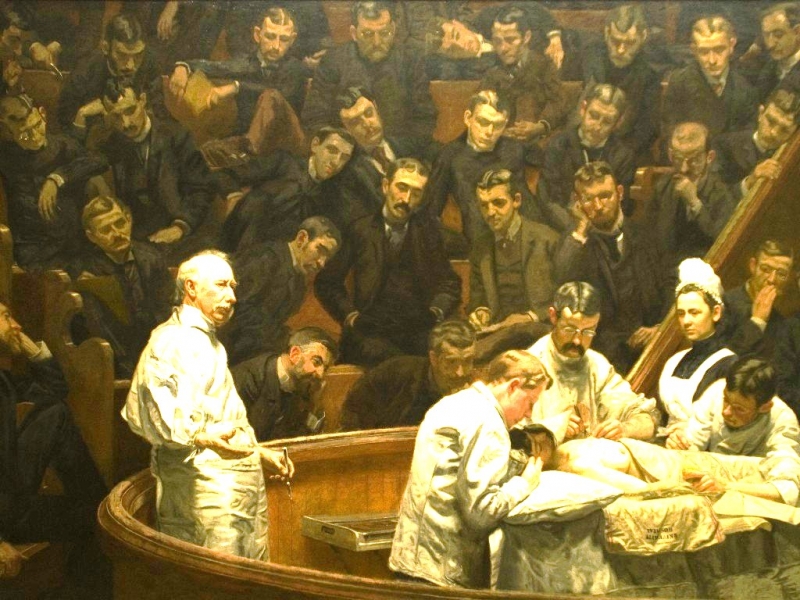 the scalpel held by Dr. Agnew for his portrait
, 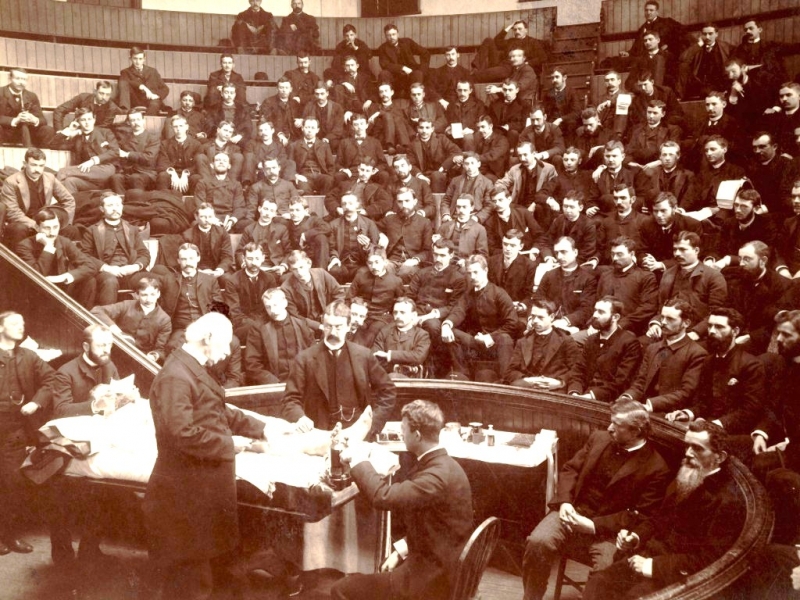 Agnew Clinic
This photograph of Dr. Agnew was used by Eakins in preparation for his famous painting.
General Surgery and Anesthesia Amputation