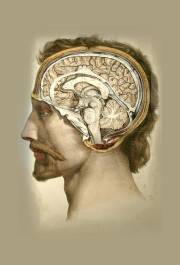 It was in the seventeenth century that modern medicine began with the publication of Sir William Harvey's classic text Exercitatio anatomica de motu cordis. He introduced the scientific method, and medicine had finally and forever ascended from the Dark Ages. 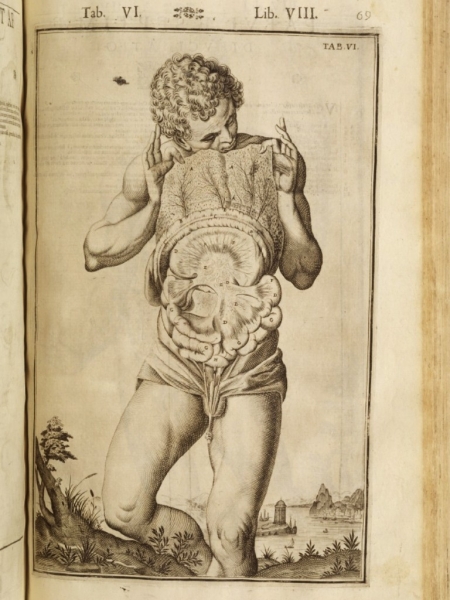 Tabulae Anatomicae (1627) by Giulio Cesare
Dissected figures seemed to delight in playfully showing off their anatomy in the copperplates of Odoardo Fialetti in Tabulae anatomicae by Giulio Cesare Casseri (1552-1616). This is a demonstration of the internal organs. 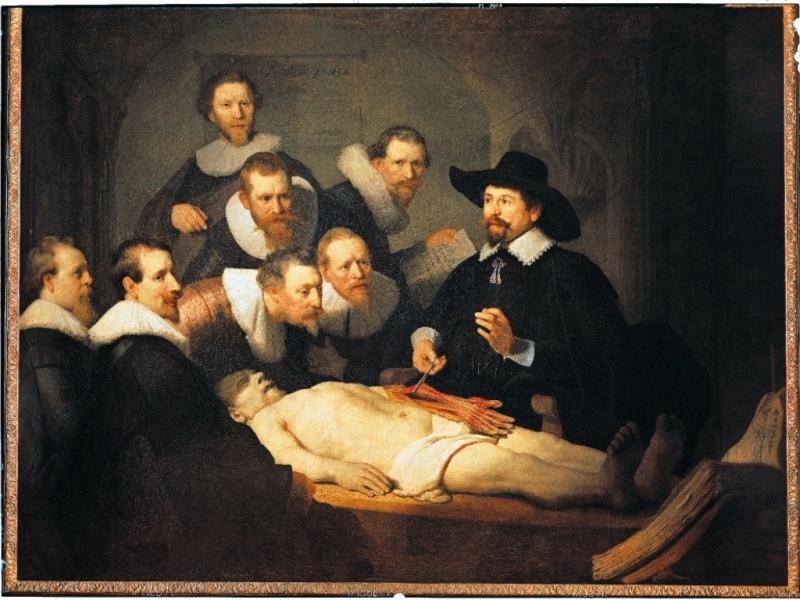 The Anatomy Lesson of Dr. Nicholaes Tulp (1632) by Rembrandt van Rijn
Rembrandt van Rijn (1606-1669) turned his attention to medicine in this famous painting. The Amsterdam Company of Surgeons had commissioned this work when Rembrandt was only 26 years old, and shows Dr. Tulp, a leading Dutch physician at the time, pointing out a tendon in a cadaver. Dr. Tulp was actually demonstrating the function of the tendons that flexed the fingers rather than their anatomy since he was more interested in the role of functional anatomy as a clue to the causes of disease. 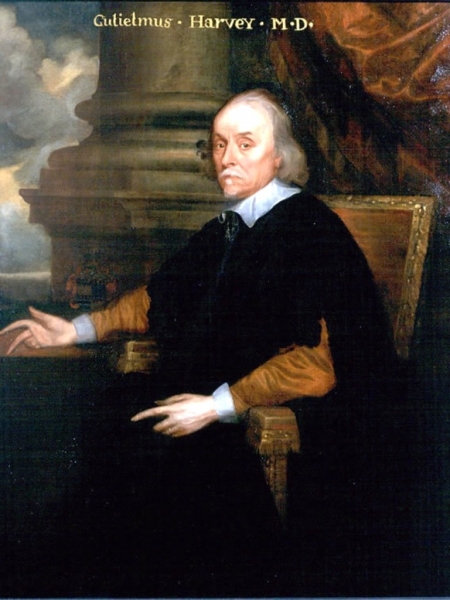 William Harvey, oil by an unknown artist
the skeletal systemPossibly the most important landmark in the history of medicine, and indeed in all of science came in 1628 when William Harvey (1578-1657) wrote Exercitatio Anatomica de Motu Cordis et Sanguinis in Animalibus. Harvey’s study of circulatory physiology was another major departure from the long held principles held by Galen. His use of the scientific method and his application of mathematical measurements to vital phenomena revolutionized medical investigation. This was one of several paintings saved by a librarian from the great London fire of 1666 as he ran with with it under his arm.
, 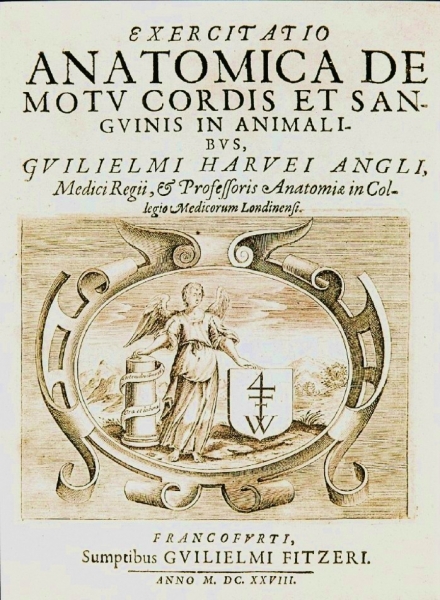 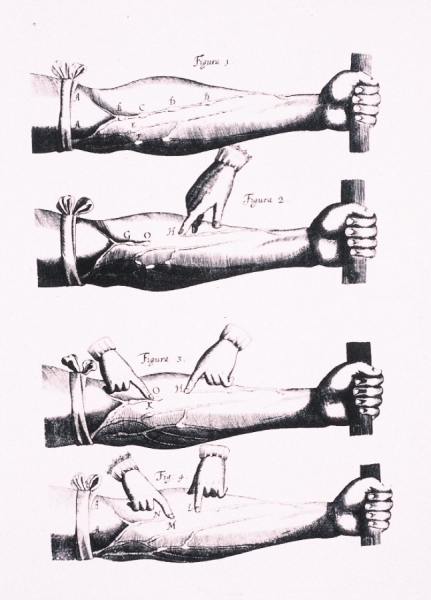 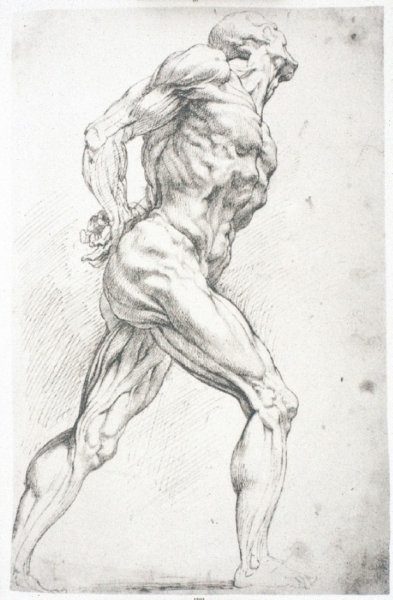 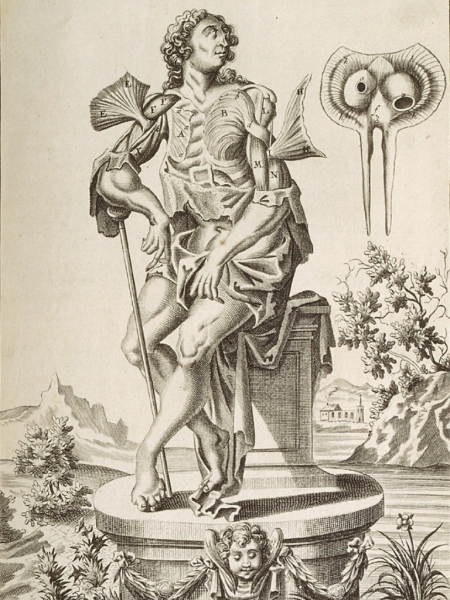 A Compleat Treatise of the Muscles as they Appear in the Humane Body (1681) by John Browne
John Browne (1642-1702) produced a copperplate showing a posing nobleman in this depiction of the muscular system. Here the subject appears to be from the upper class though the poor were usually the ones whose remains found their way onto dissecting tables for study by artists and physicians.
, 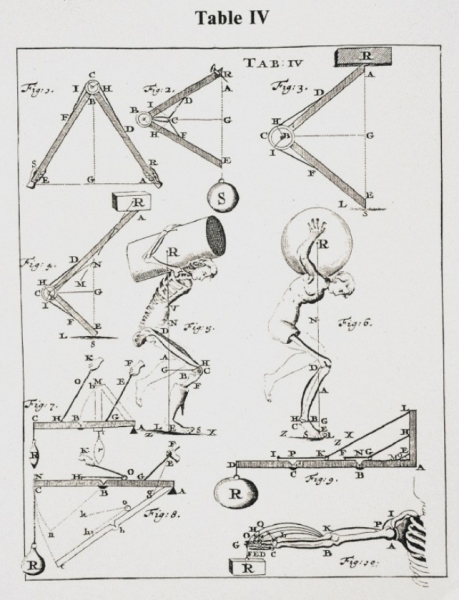 de Motu Animalium (1680-1681) by Giovanni Alfonso Borelli
Anatomists and physiologists began to interpret the body in terms of its structure and mechanics, leaving aside questions of religion and the “soul” to clerics. Astronomer and mathematician Giovanni Borelli of Pisa exemplified this approach in his De Motu Animalium when he applied the laws of physics to view the body as a machine that functioned by way of a system of pulleys and levers. This is a demonstration of leg joints
, 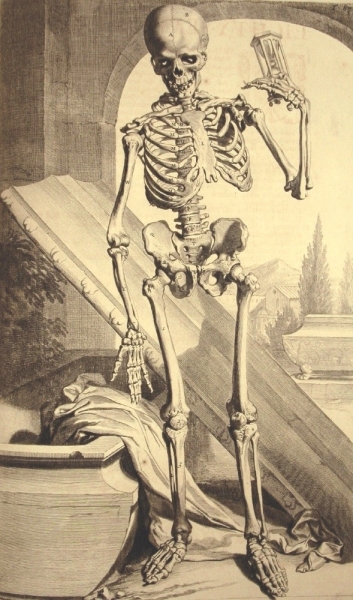 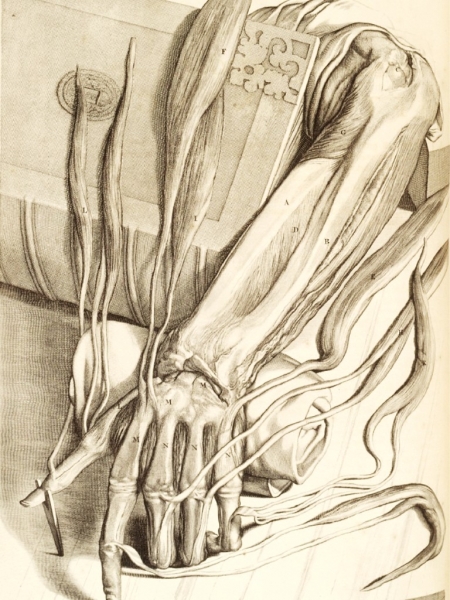 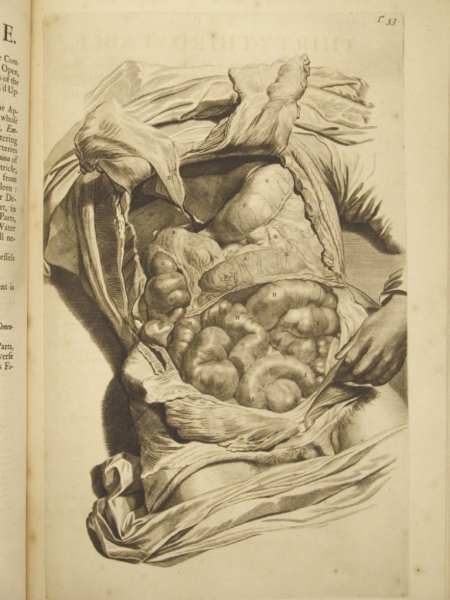 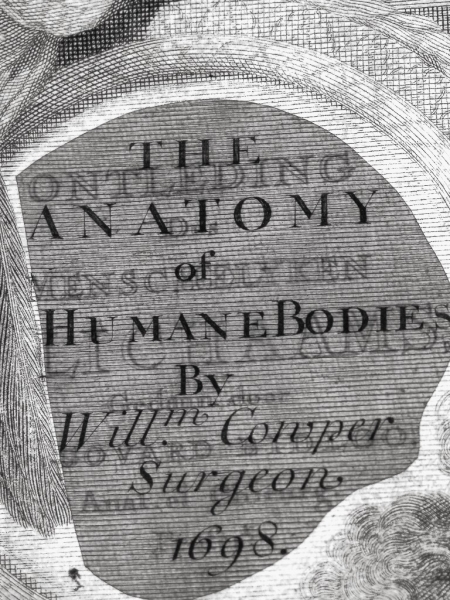 The Anatomy of Humane Bodies (1698) by William Cowper
This is a close up of Cowper's title page with pasted on credits over Bidloo's name. 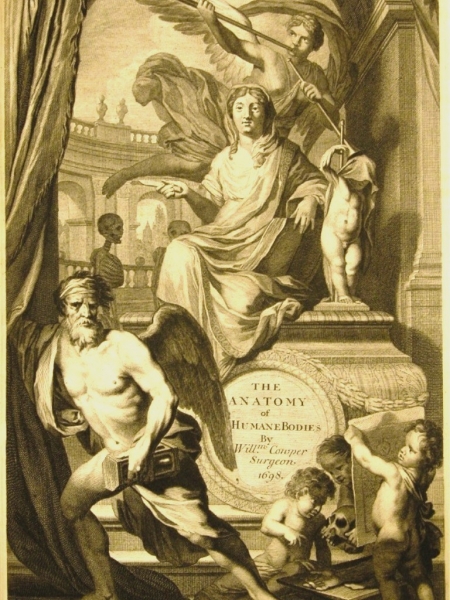 The Anatomy of Humane Bodies (1698) by William Cowper
This is the title page of perhaps the finest anatomy text of the seventeenth century. William Cowper published the same book using the same illustrations, merely providing a translation from Latin into English. He did not acknowledge Bidloo as the true author anywhere in the book, and pasted a small printed flap (see below) with his own name over that of Bidloo on the engraved title page of the first edition. 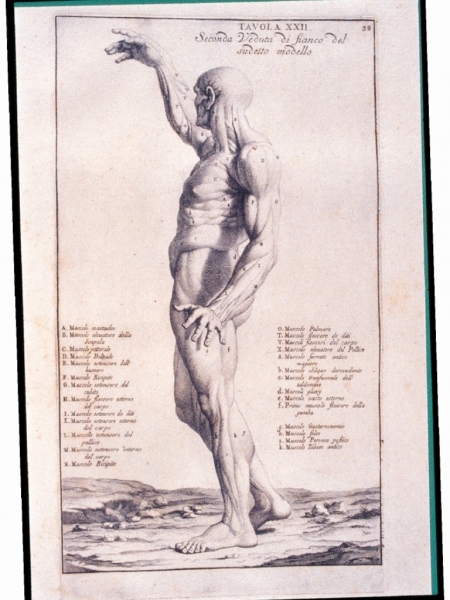 Anatomia per uso et Intelligenza del disegno ricercata non solo su gl'ossi (1691) by Bernardo Genga
Ecorché statuettes, or flayed anatomic models, were popular during the sixteenth and seventeenth centuries and were often patterned after sketches similar to this copperplate ecorché by Bernardino Genga, (1620-1690).