The explosion of technology and the discovery of the many applications of electricity in the early twentieth century provided opportunities for entrepreneurs who were not burdened by having to prove the safety or efficacy of their therapeutic theories. 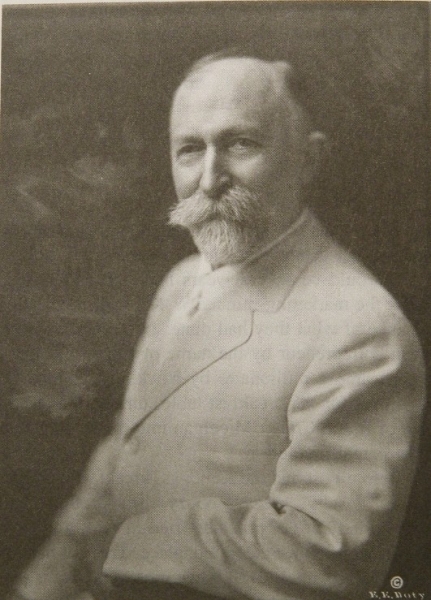 Dr. John Harvey Kellogg
Dr. Kellogg (1852-1943) was a holistic physician from Battle Creek, Michigan whose belief in moderation brought him to national fame. Visitors from all over the world visited his sanitarium to regain their health through a vegetarian diet, regular enemas, exercise, and therapy that included water, vibration, and electrical treatments. 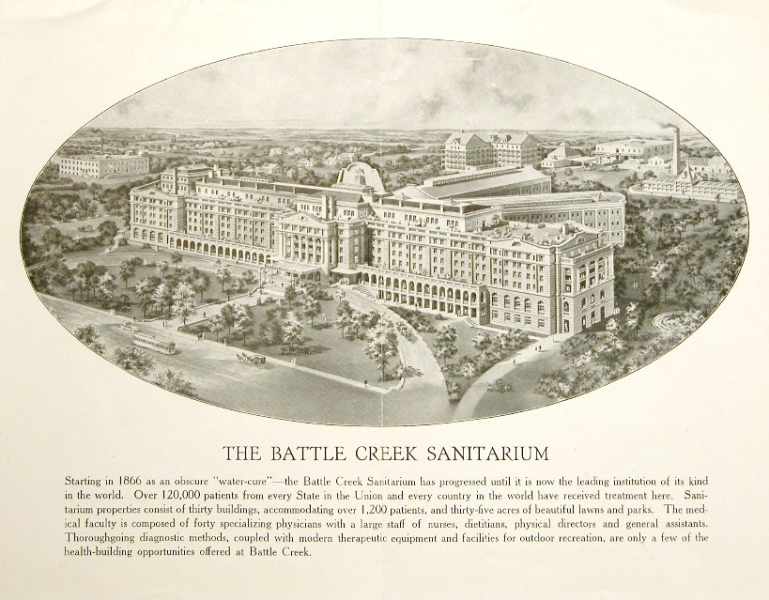 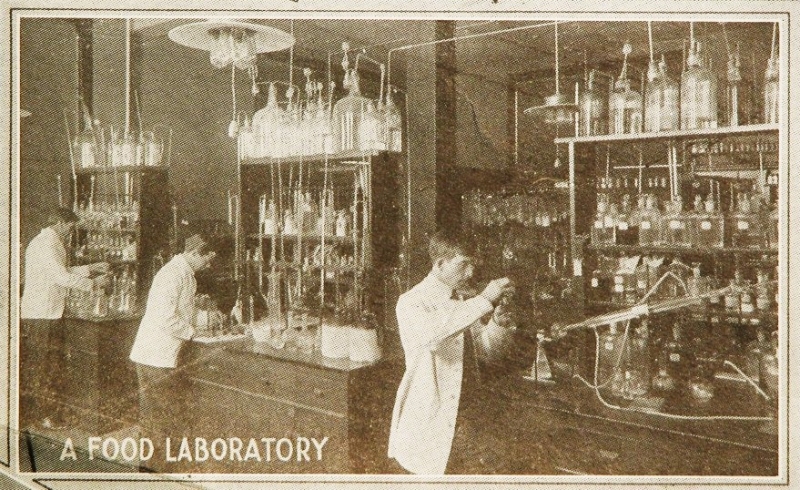 food laboratory at the Battle Creek Sanitarium
The baked wheat flakes Kellogg produced to feed guests became so popular that they replaced the usual breakfast pork and fried potatoes of the day, creating the present cereal empire that was commercially developed by his brother, William Keith.
, 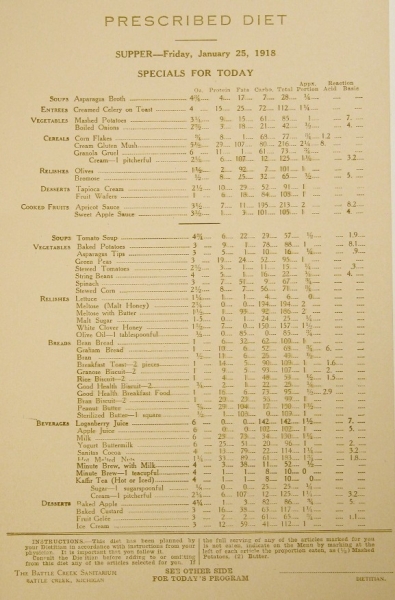 prescribed diet in January, 1918 at the Battle Creek Sanitarium
All had to endure rather bizarre dietary regimens of Dr. Kellogg. He was also an early advocate of “Fletcherizing,” or the chewing of food to excess before swallowing. 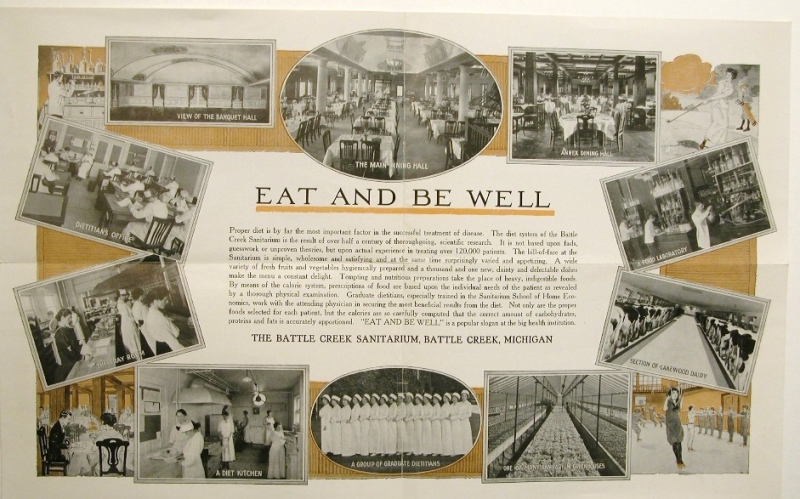 inside the Battle Creek Sanitarium
Those entering were exposed to a full range of therapeutic modalities though one of Kellogg's great obsessions was with functions of the colon, and his “guests” spent many hours in bowel cleansing activities. 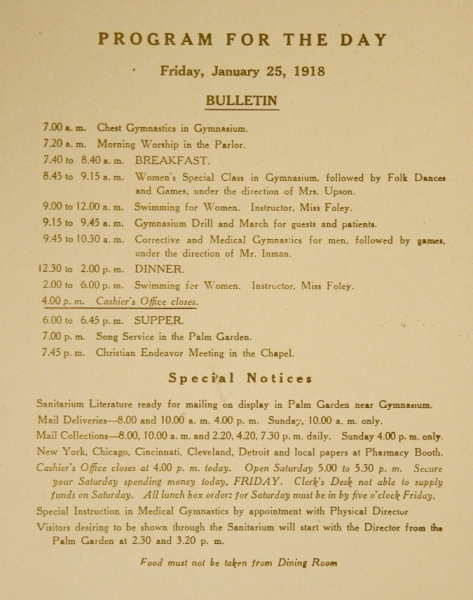 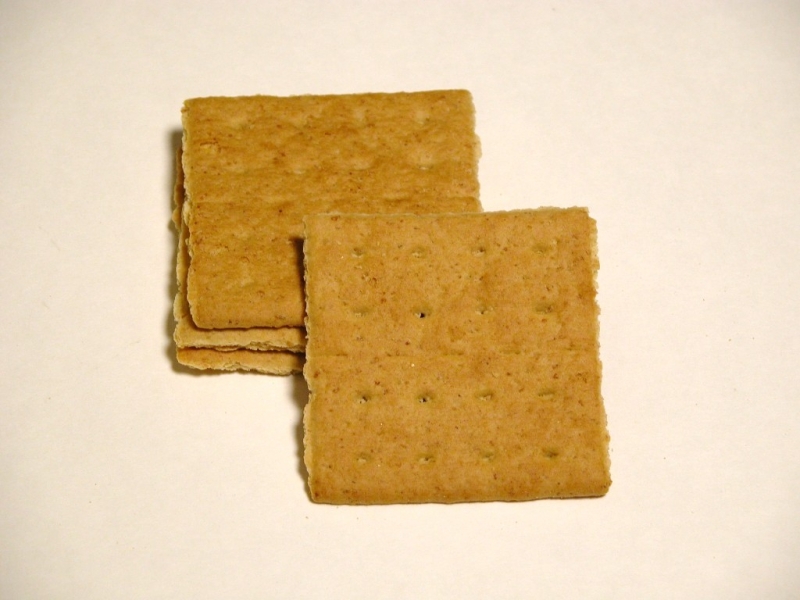 Graham crackers
A number of entrepreneurs from Battle Creek, including Sylvester Graham (“Graham Crackers”) and CW Post (“Post Cereals”), soon climbed upon the bandwagon with their manufacture of breakfast cereals and health foods. 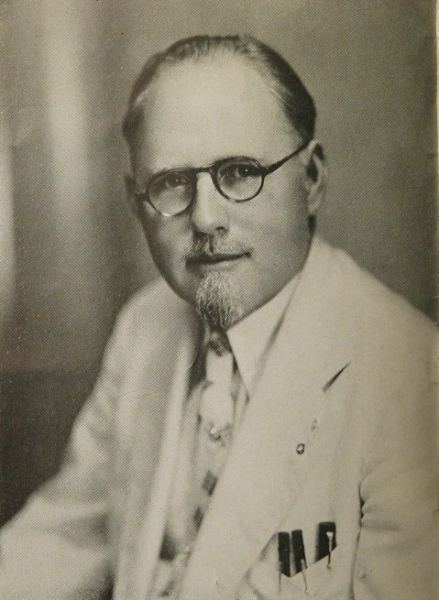 Dr. John Brinkley, the "goat gland doctor"
Dr. John Romulus Brinkley became the wealthiest and most powerful quack physician in the world by promoting rejuvenation through the transplantation of goats’ gonads to his patients. The theory that animal characteristics could be transmitted by transplantation had previously been suggested by physicians for hundreds of years, and with a talent for promotion, Dr. Brinkley's made his operation the rage of America and the world. 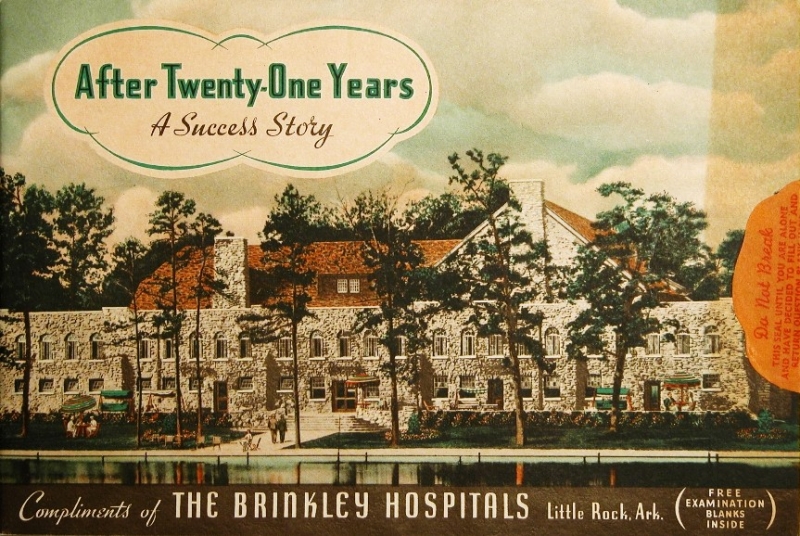 The Brinkley Hospital in Little Rock Arkansas
This is one of Dr. Brinkley's hospitals, which was dedicated to the performance of his procedure.
, 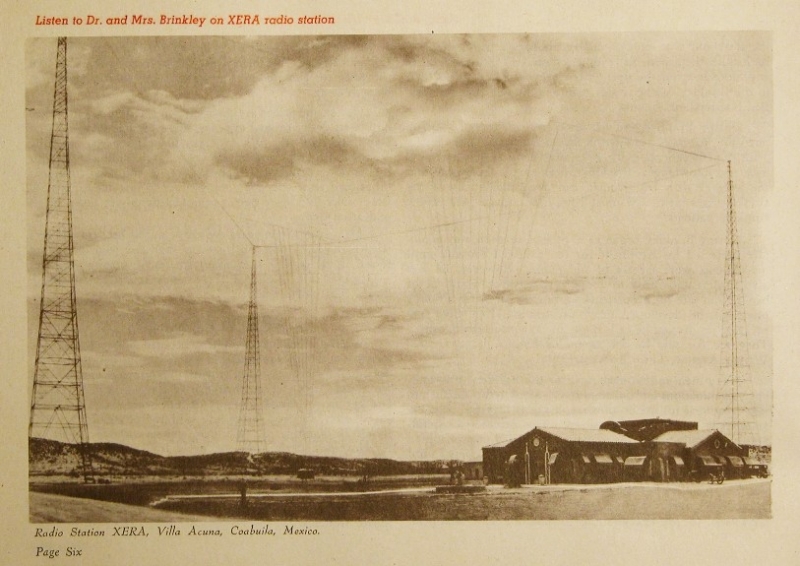 XERA, Brinkley Radio
In 1931, Brinkley's radio station XER which was located just across the Mexican boarder initially broadcast a variety show with a powerful 75,000 watts, though after some encouragement, Mexican authorities allowed him to boost power to 500,000 watts, making it the most powerful station in the world. It was not long before XER became XERA and with power increased to an earth shattering one million watts, many channels were drowned out over a large part of the United States. 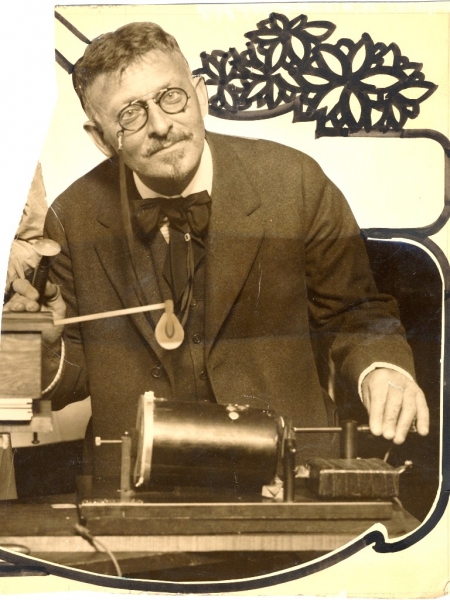 Dr. Albert Abrams, "the King of the Quacks'
Albert Abrams, AM, MD, LLD, FRMS, a neurologist born in San Francisco in 1864, was the King of American Charlatans. Abrams believed that the diagnosis and treatment of a number of illnesses began with the percussion of reflex centers in the spine, and he was happy to provide courses on the subject at up to two hundred dollars apiece. Abrams’ electric devices were termed ERA, or Electronic Reactions of Abrams (later to be called “radionics”), and he was responsible for the production of a generation of quack machines that flooded the market in the first part of the twentieth century. 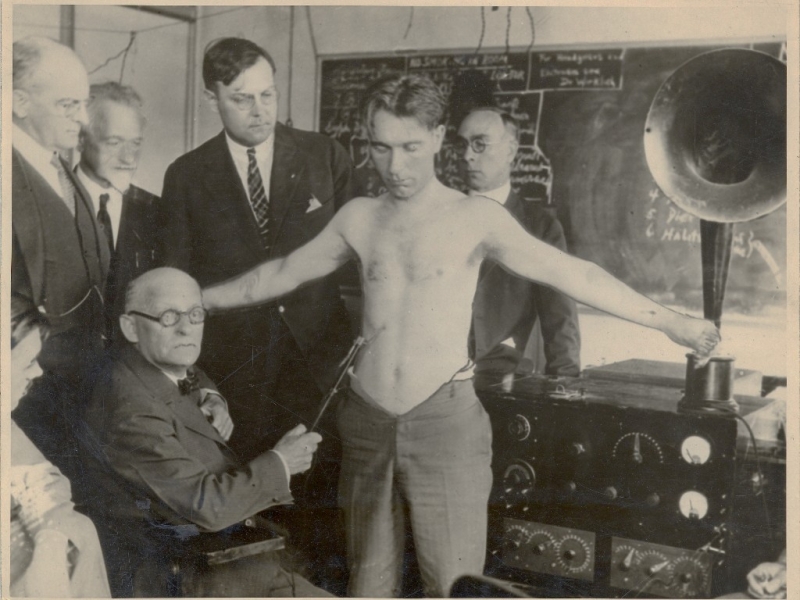 Dr. Abrams treating a patient
The treatment method recommended by Abrams involved an “oscilloclast,” which was a machine that supposedly duplicated the vibrations characteristic of each disease in order to neutralize that disorder. 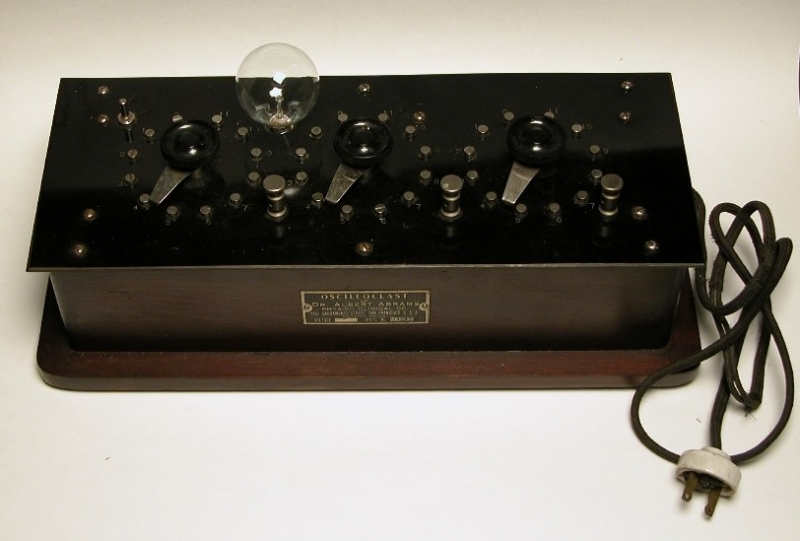 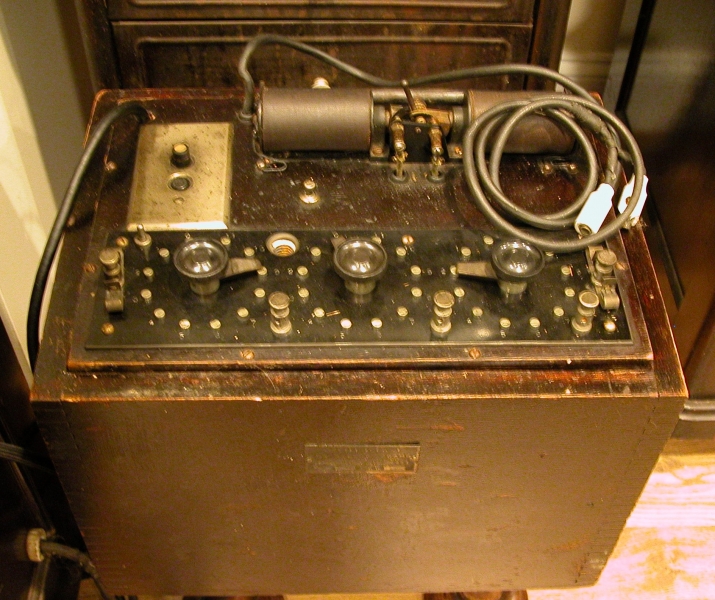 oscilloclast
This is a rarer and more advanced form of Abrams' oscilloclast.
, 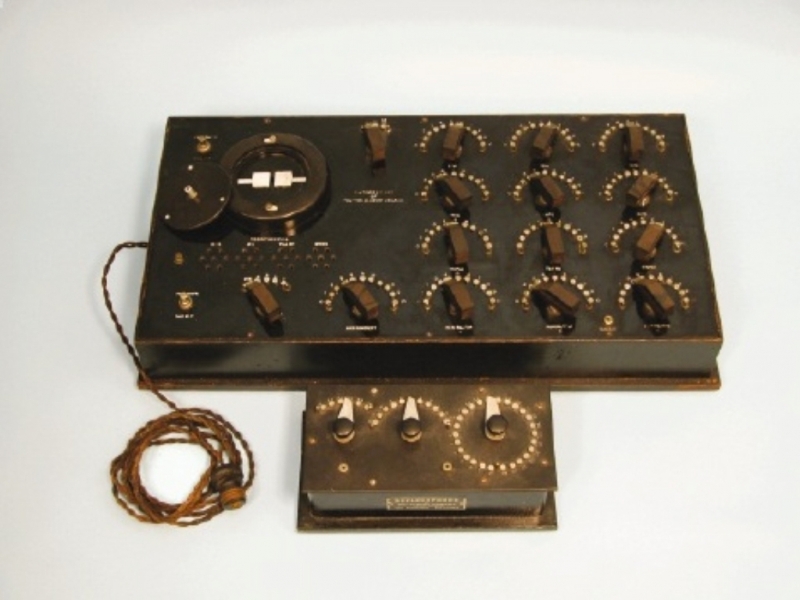