“His instruments of torture, called by courtesy dental tools, were many and varied. He was very skillful in his profession and when he took a job he did it in first-class style. The dental tools are simply copies in miniature of articles used in the Spanish inquisition and on refractory prisoners in the Tower of London. There are monkey wrenches, raspers, files, gouges, cleavers, pickes, squeezers, drills, daggers, little crowbars, punches, chisels, pincers, and long wire feelers with prehensile, palpitating tips, that can reach down through the roots of a throbbing tooth and fish up a yell from your inner consciousness. When a painstaking dentist cannot hurt you with the cold steel, he lights a small alcohol lamp and heats one of his little spades red hot, and hovers over you with an expectant smile. Then he deftly inserts this into your mouth and when you give a yell he says, ‘Does that hurt?’” 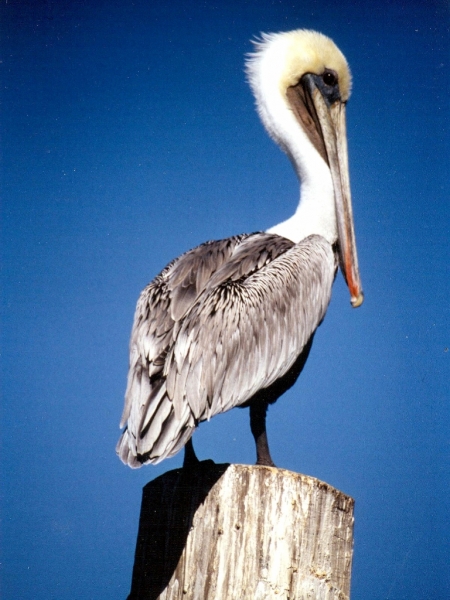 a pelican
In the early fourteenth century, Guy de Chauliac invented an instrument that continued to be used into the late eighteenth century. It was called a dental pelican because of its resemblance to the beak of that bird. With it, the operator could apply extreme leverage to loosen the tooth out of the socket.
, 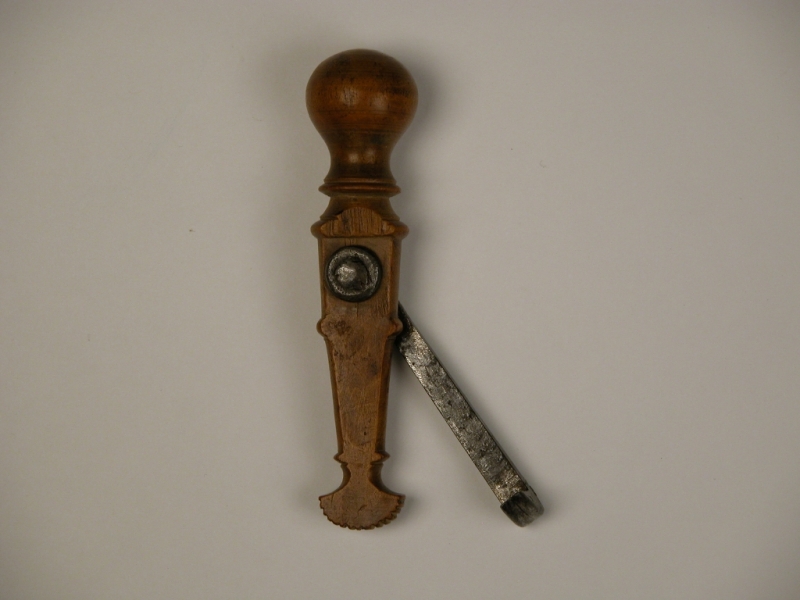 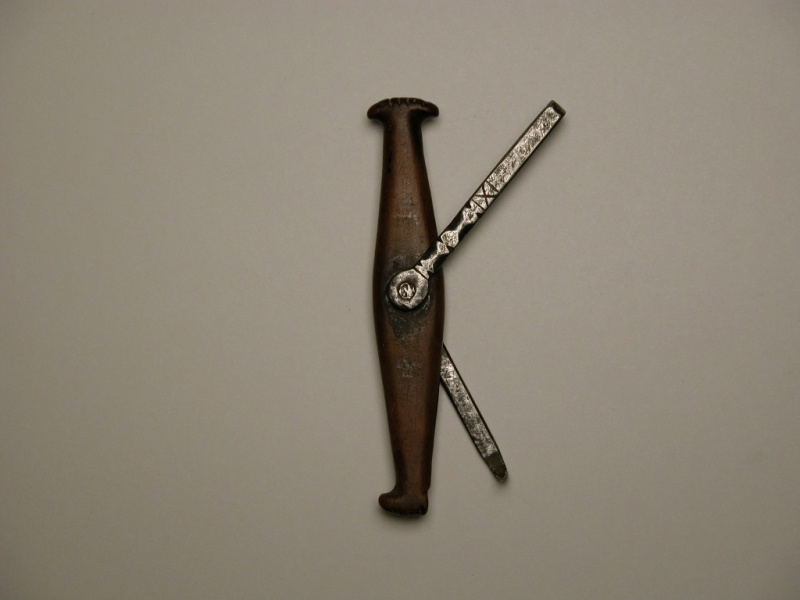 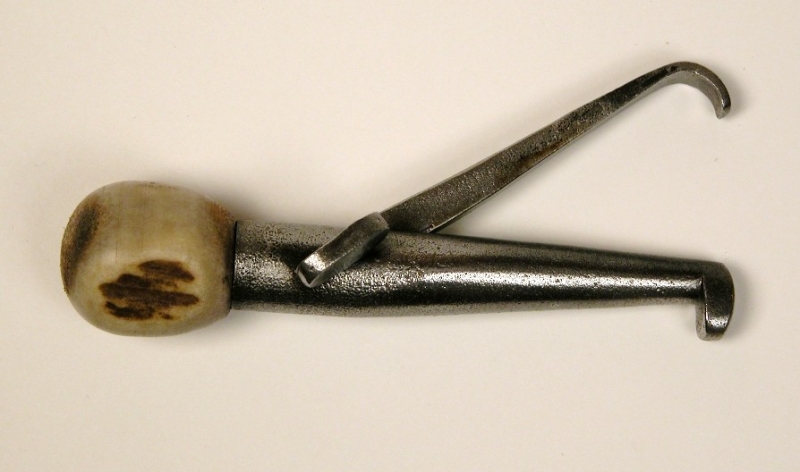 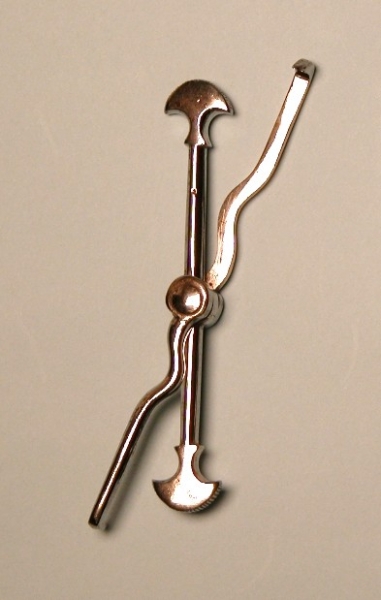 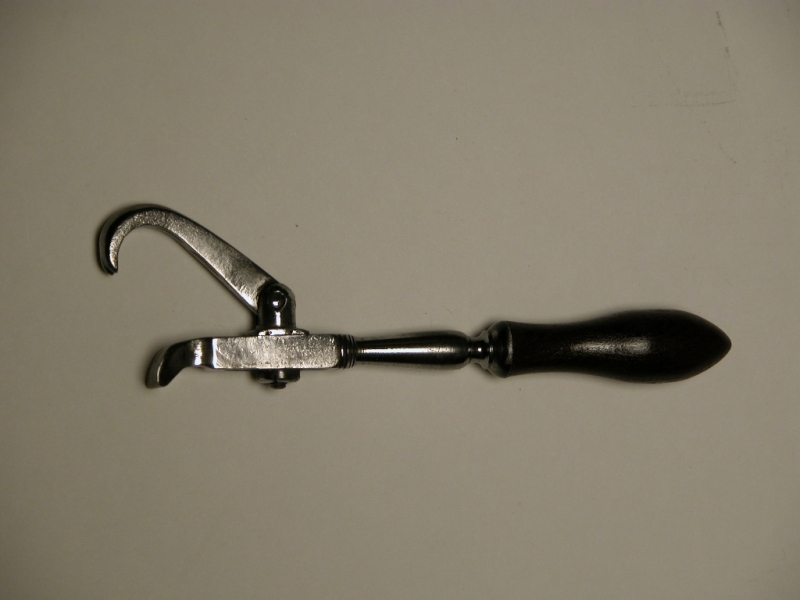 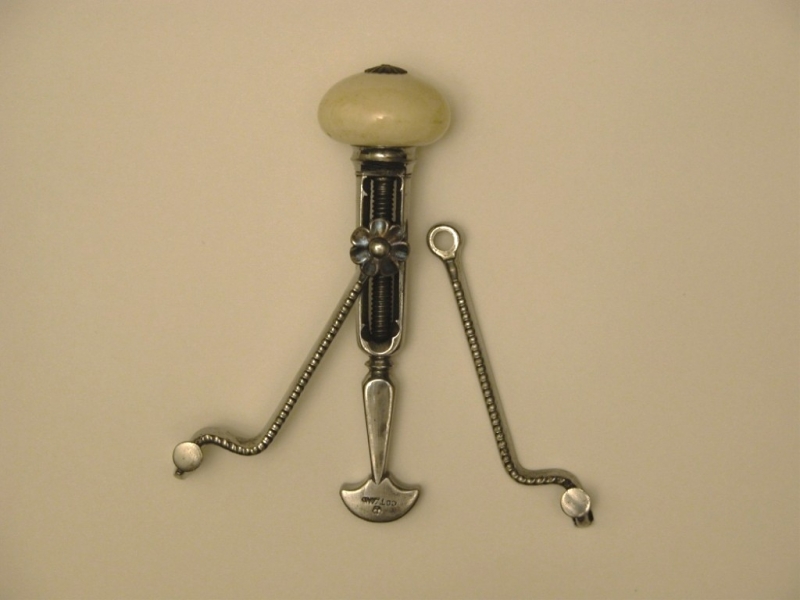 dental pelican (ca. 1860)
This ivory screw type pelican was the finest of its era.
, 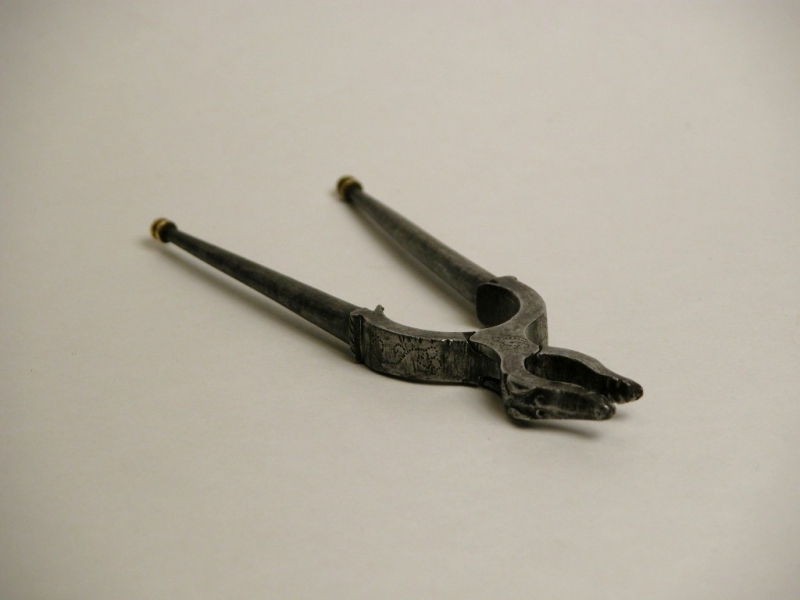 dental forceps (ca. 1600)
These forceps were decorated with a dragon's mouth.
, 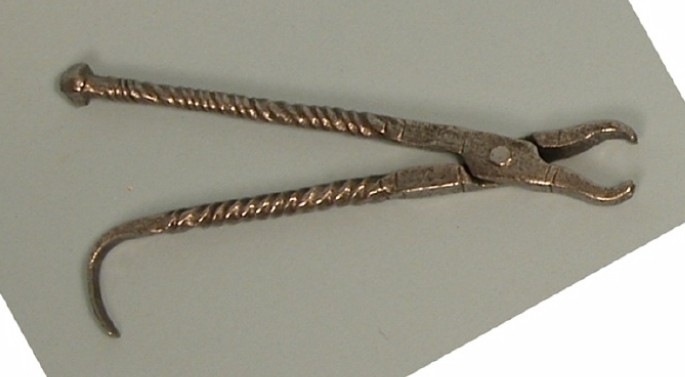 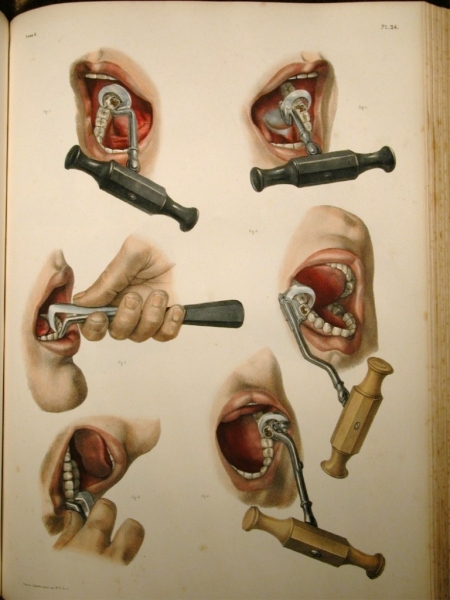 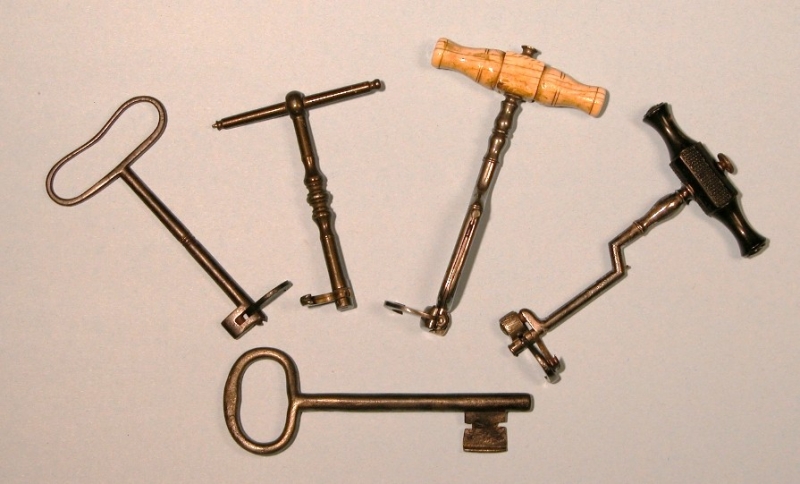 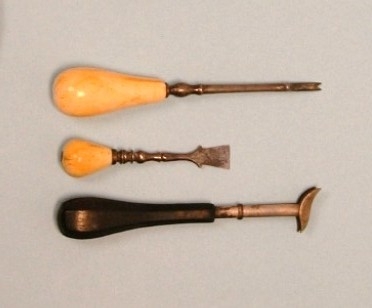 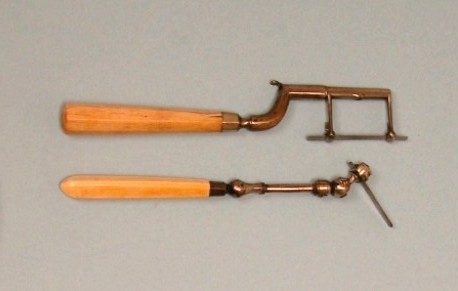 ebony dental screw
Once the crown of the tooth was broken off, this instrument was drilled into the tooth for removal.
, 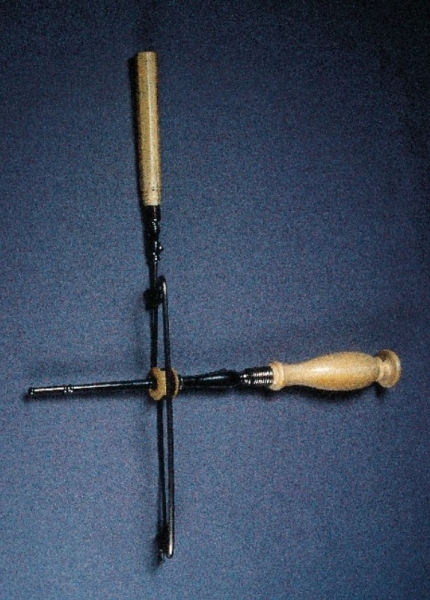 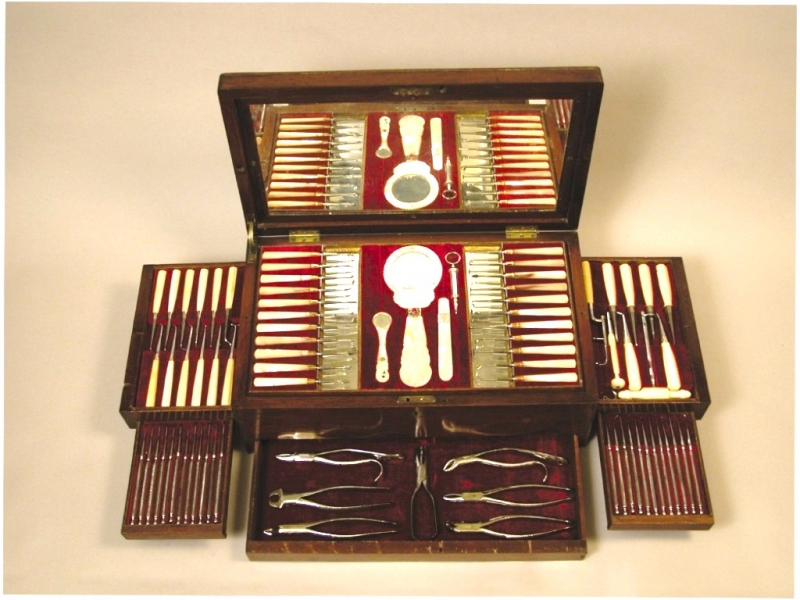 cased dental set of ivory and mother-of-pearl (ca. 1860) by John D. Chevalier
A dentist would have been proud to exhibit this large cased set to his patients as a mark of his expertise and success.
, 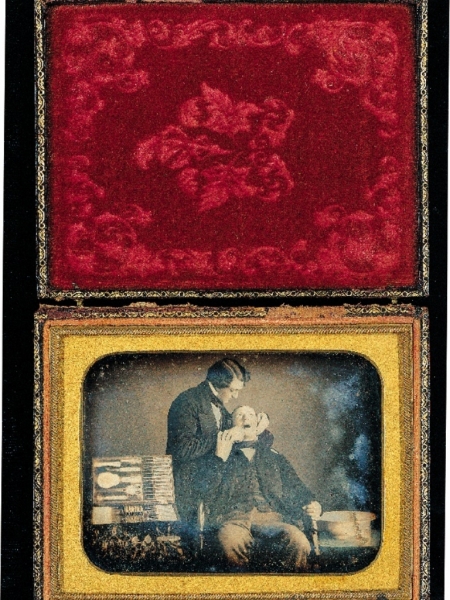 daguerreotype of a dentist with his instruments (ca. 1855)
, 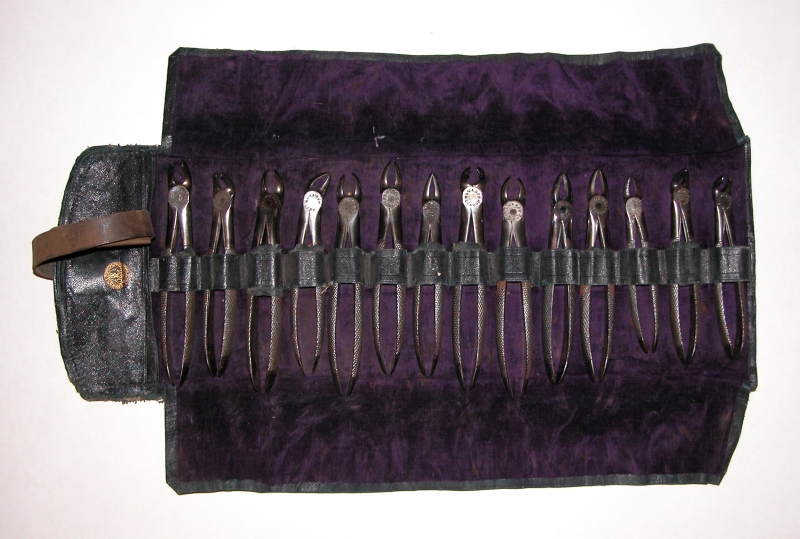 Maw, Son & Thompson roll up dental extraction set
This ninetenth century portable set would have been used by dentists in their travels from town to town.
, 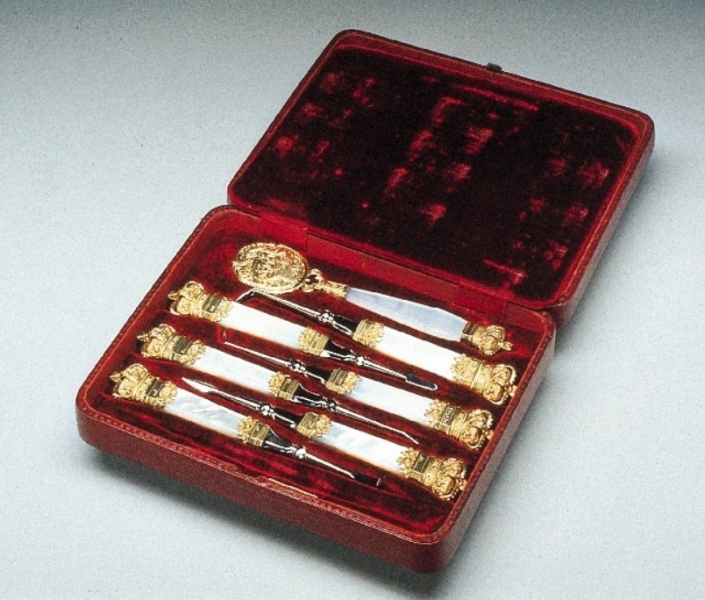 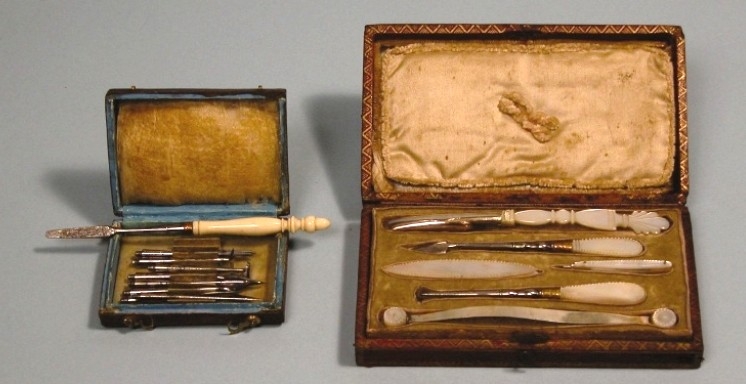