The development of such signs and symptoms as fever, chills, and gangrenous changes leading to death must have been mysterious indeed, and it was not until fairly recently that physicians clearly understood that infectious diseases were caused by microorganisms. It took the discovery of the microscope before anyone believed that tiny creatures could live inside us, and even when microorganisms were first seen, not many believed that the little structures they saw were alive, and certainly not the cause of illness. 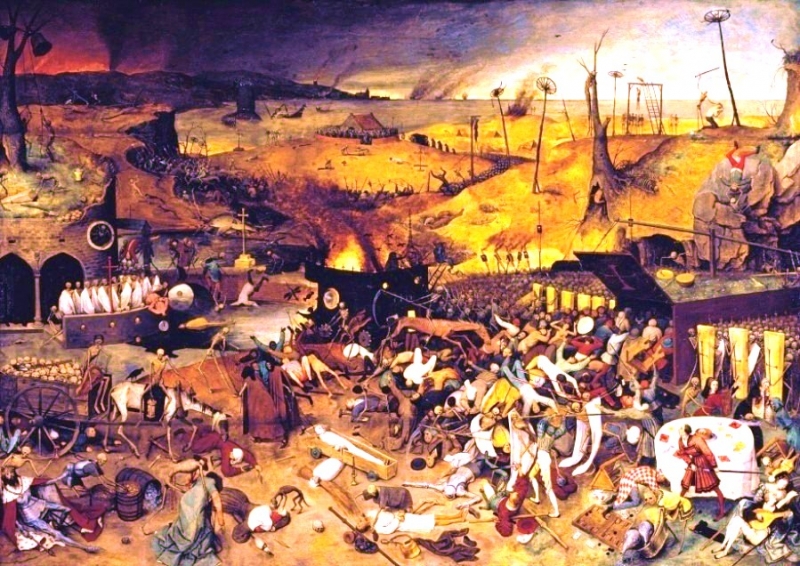 The Triumph of Death (1562–1563), oil on wood by Pieter Brueghel the Elder
In the sixth century, more than one hundred million people died as a result of an infection caused by Pasteurella pestis, a bacterium transmitted to humans from fleas by way of infected rats. What came to be called “The Black Death” took the lives of up to sixty percent of those exposed from the gangrene and sepsis that followed the cyanosis and dark hemorrhages which developed under the skin.
, 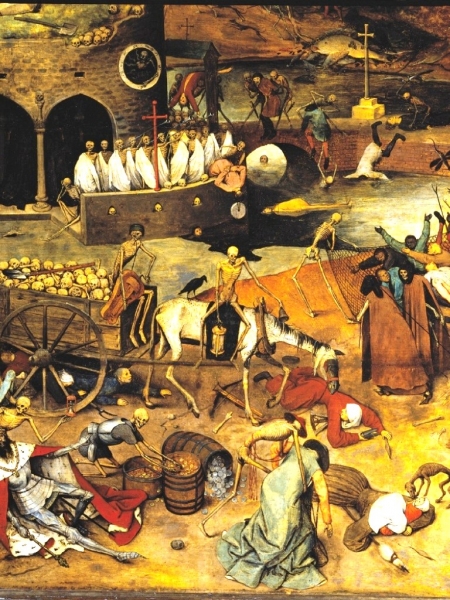 The Triumph of Death (1562–1563), oil on wood by Pieter Brueghel the Elder
This is a close up showing that those of all social standing succumbed from The Plague.
, 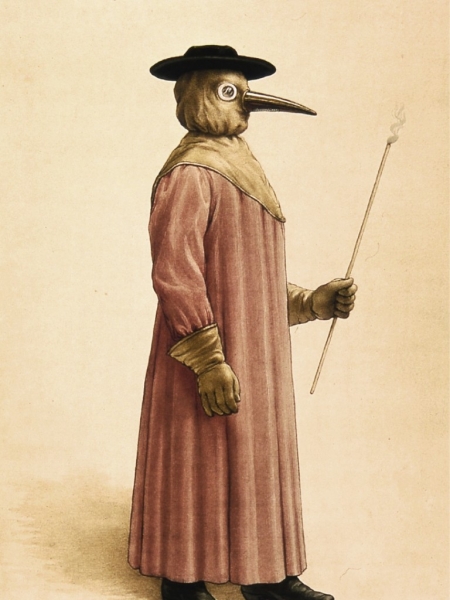 seventeenth century watercolor representation of a costume worn by physicians during an outbreak of the plague
Physicians believed that the disease was spread by air and when treating victims, they carried flowers in their pockets which they dissolved in vinegar along with the powder of cloves, cinnamon, incense and perfumed oils. This material was then placed in the long noses of masks they wore to protect themselves from contagion (and to hide the offensive odor of death).
, 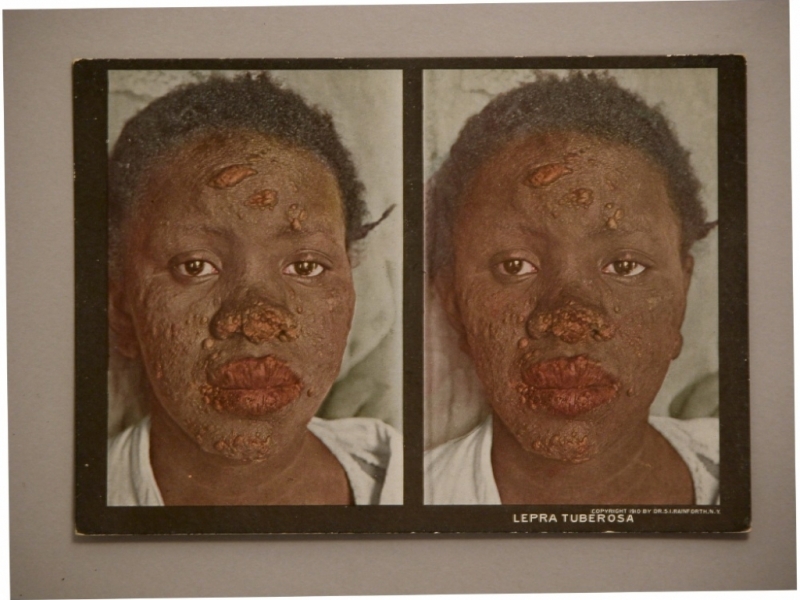 sterioscopic views of leprosy (1910) by S.I. Rainforth, MD
The suffering from Leprosy has been enormous from the beginning of recorded history as lepers were accused of sinning and then sent to islolated colonies.
, 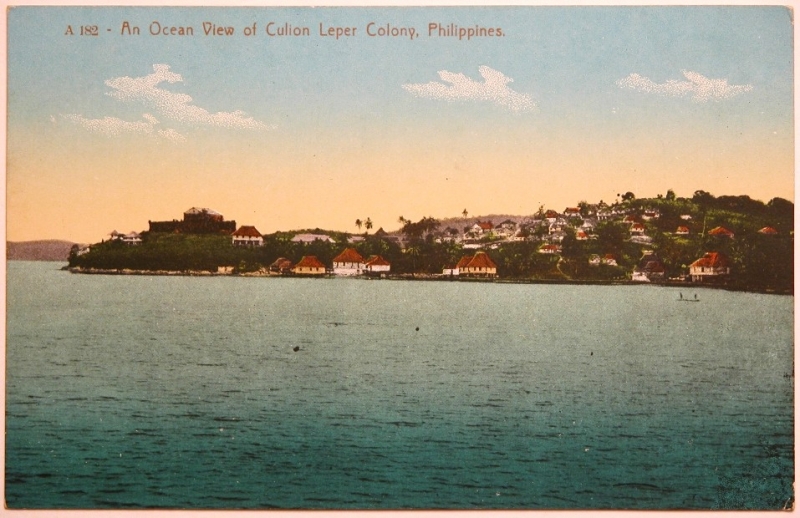 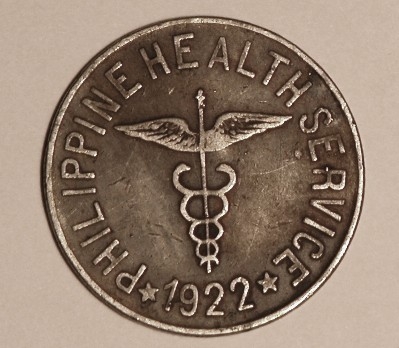 ten centavo coin from the Culion leper colony
Coins were manufactured for use by lepers only.
, 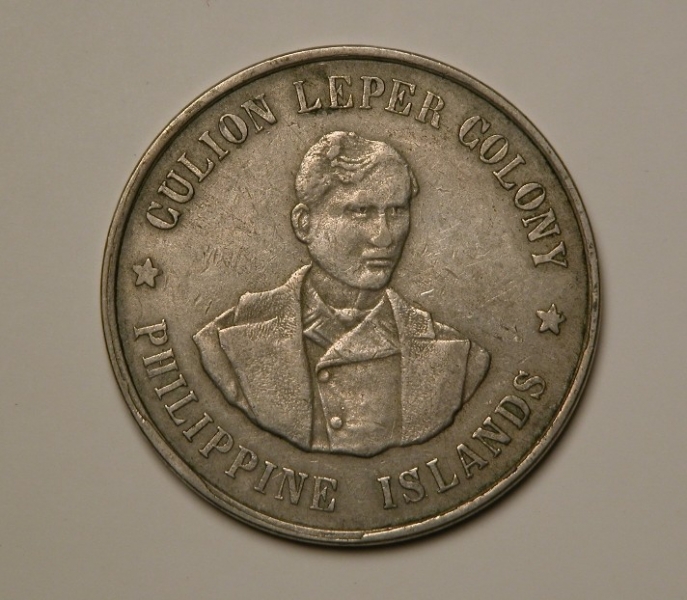 one peso coin from the Culion leper colony
, 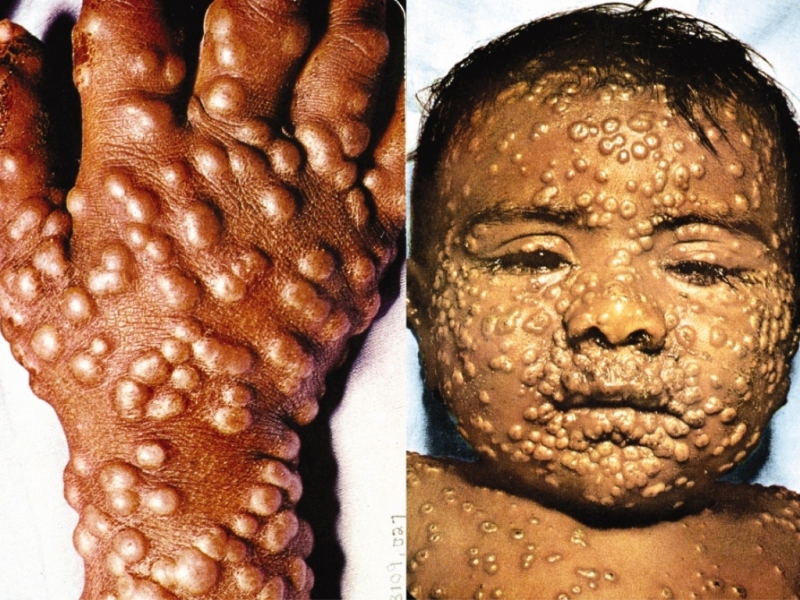 Child with smallpox (early twentieth century)
For thousands of years, smallpox has been one of the most devastating diseases in the history of mankind, responsible for the death, disfigurement, and blindness of literally tens of millions in Asia, Europe, and America.
, 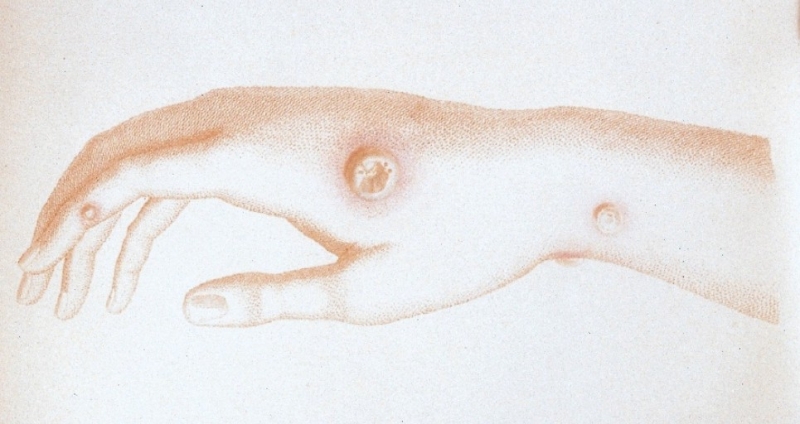 An Inquiry into the Causes and Effects of the Variolae Vaccine (1798) by Edward Jenner
In May of 1796, Edward Jenner (1749-1823) took an important step in making vaccination available to the masses when he removed infectious material from Sarah Nelms, a milkmaid who had been exposed to cowpox and inoculated the arm of James Phipps.
, 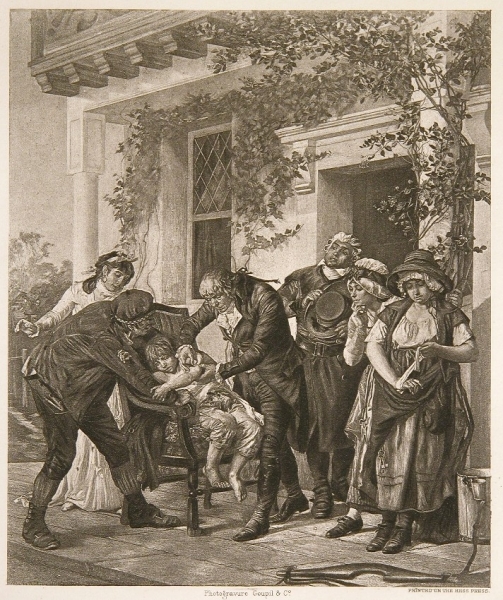 1894 photogravure by Georges- Gaston Melingue
Immunization, or the prevention of a disease by previous exposure to an infecting agent, has been practiced for centuries, well before there was any real understanding of communicable disease.
, 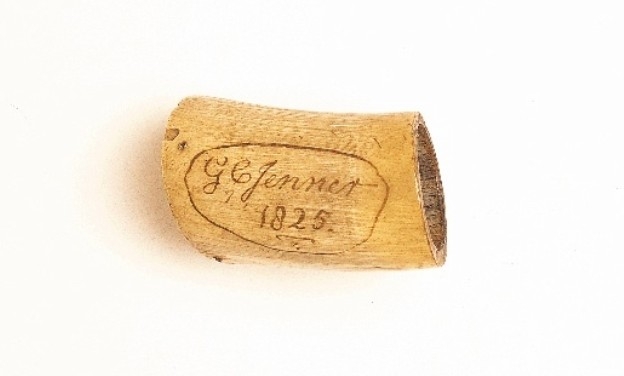 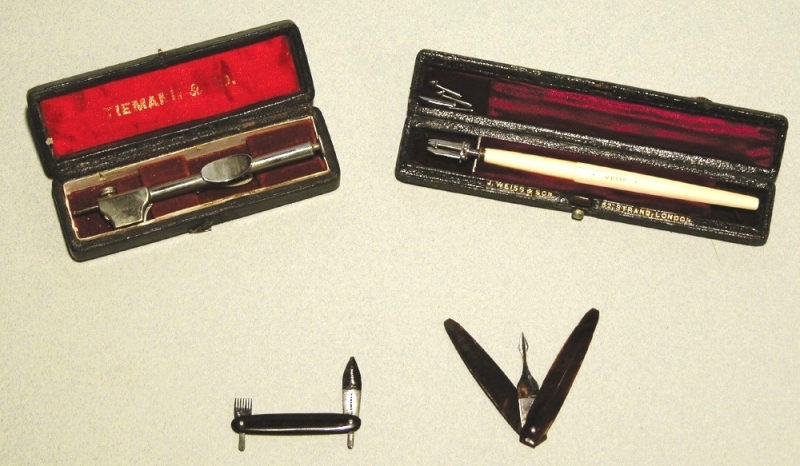 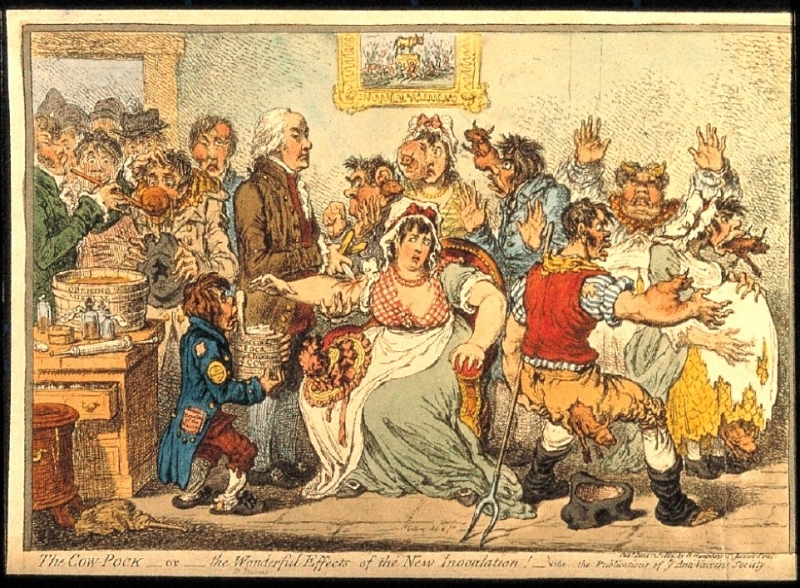 etching of Edward Jenner among patients in the Smallpox and Inoculation Hospital at St. Pancras (1802) by James Gillray
Not all embraced Jenner's landmark discovery, one of whom was Benjamin Franklin who changed his position after the death of his unvaccinated son to smallpox.
, 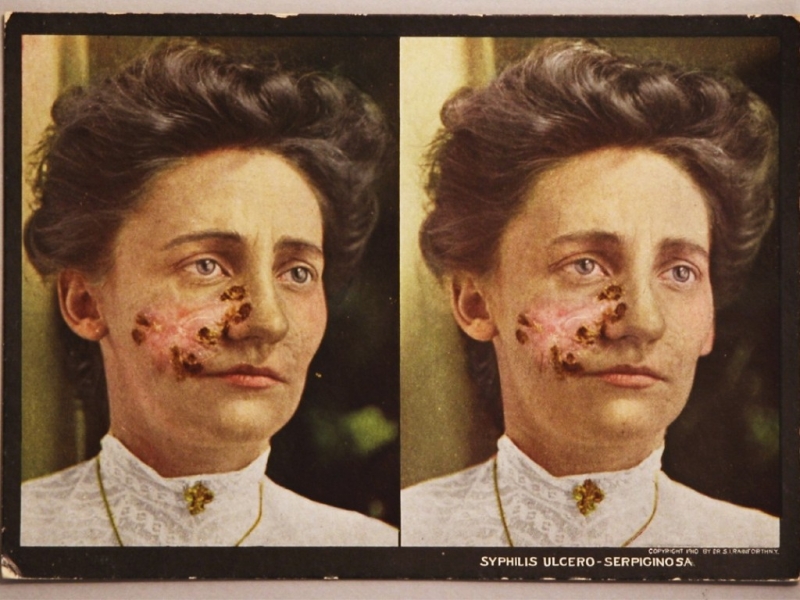 sterioscopic views of syphilis (1910) by S.I. Rainforth, MD
Syphilis was always known to be a contagious disease though its origin and transmission, like many maladies in the medieval era, were shrouded in mystery. The first accounts of syphilis date back to December of 1494 when King Charles VIII sent his French army to Italy in order to conquer the Kingdom of Naples, though some feel that the disease came back to Europe from the New World with Columbus’ crew. That year marked the appearance of syphilis throughout all of Italy, and the French called it the Disease of Naples on their return home. The Neapolitans, on the other hand, gave it a name that lasted, the French Disease, because it had appeared for the first time with the French expedition.
, 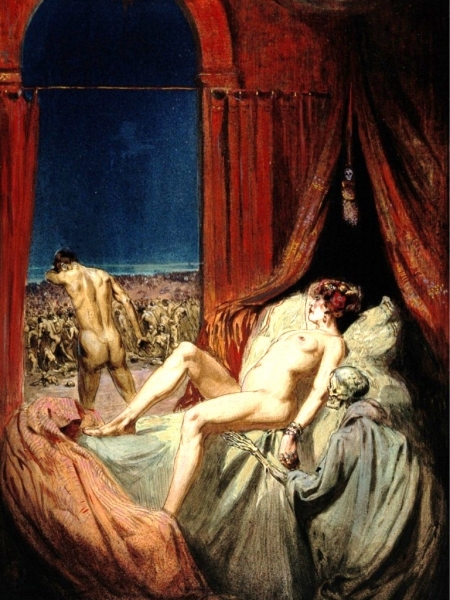 The Tragedy of Syphilis (ca. 1910), watercolor by Richard Tennant Cooper
,

The Anatomy and Philosophy of Expression (1847) by Charles Bell (tetanus)
According to Aretaeus (120-180 A.D.): "Opisthotonos bends the patient backward, like a bow so that the reflected head is lodged between the shoulder-blades; the throat protrudes; the jaw sometimes gapes…Should the mischief then seize the chest and the respiratory organs, it readily frees the patient from life; a blessing this, to himself, as being a deliverance from pains, distortion, and deformity."
, 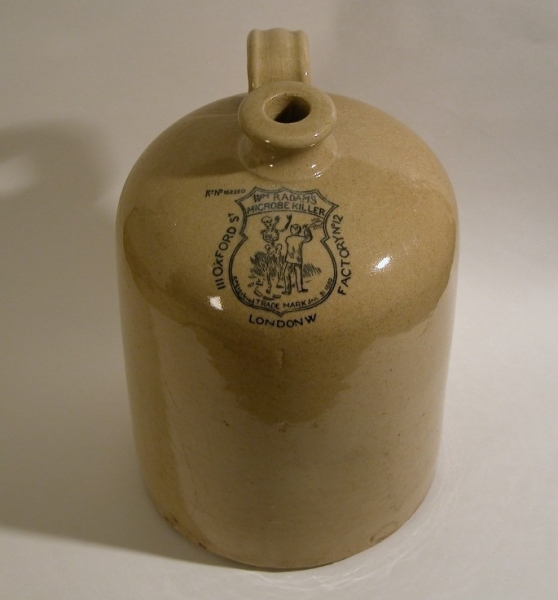 Radam's Microbe Killer
After the role of microscopic organisms in causing disease was accepted, entrepreneurs quickly seized the opportunity to promote any number of worthless remedies. The Sherley amendment to the food and drug law was passed in 1912, declaring that a medication was unlawful “if its package or label shall bear or contain any statement, design, or device regarding the curative or therapeutic effect of such article or any of the ingredients or substances contained therein, which is false and fraudulent.” One of the first to feel the weight of this new regulation was William Radam’s Microbe Killer, an oral medication that supposedly released healing gases that disinfected the entire body, curing such diverse diseases as malaria, leprosy, small pox, measles, headache, and constipation. Chemists determined that it contained ninety-nine percent tap water, and one percent sulfuric acid. At best, it acted as a mild laxative, though testimonials by satisfied customers in court documented cures of any number of serous conditions including diphtheria, and cancer.
, 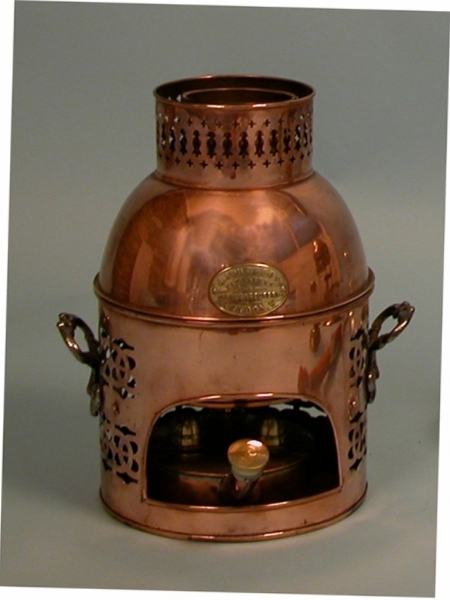 J. Foot & Sons formaldehyde generator
Formaldehyde sprays as a germicide became popular in sick rooms, though its carcinogenic risks were not known.
,

Touch Piece
From the time of Edward the Confessor in 10th century England kings were felt to be devine and so had the ability to cure the "The King's Evil" or scrofula (glandular tuberculosis) by touching the sufferer with this gold coin. This one was used by King Charled II of England in about 1670.
, 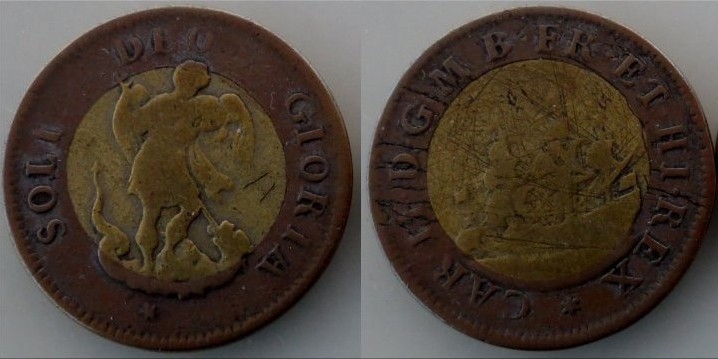 Touch Pass
This coin was given out to those wishing to attend events when the King would hold gatherings to give out his gold touch pieces to cure scrofula.
, 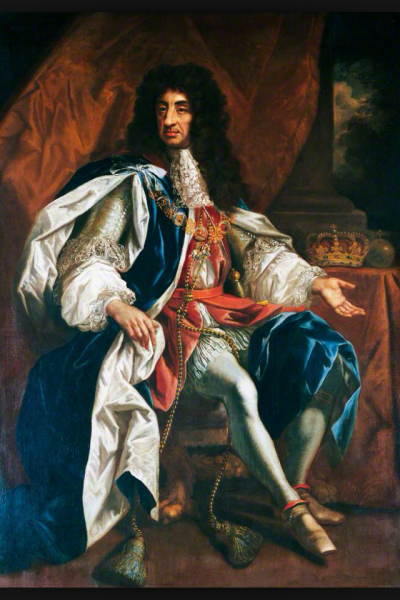 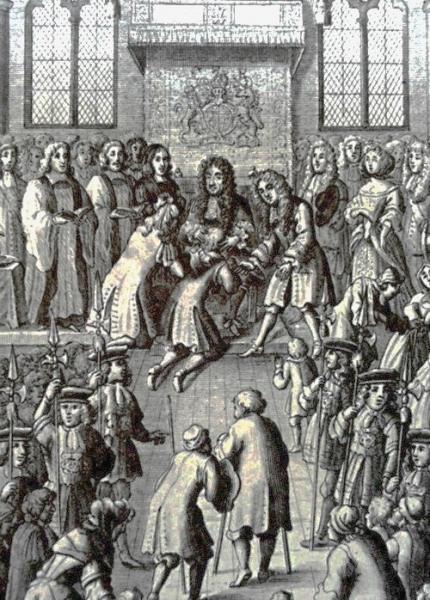