The anatomy of the lungs and chest had been studied hundreds of years before there was an understanding of the underlying physiology and pathology. Respiratory infections were described in texts as running a “natural course,” and the mortality remained high despite the use of many different therapeutic regimens. 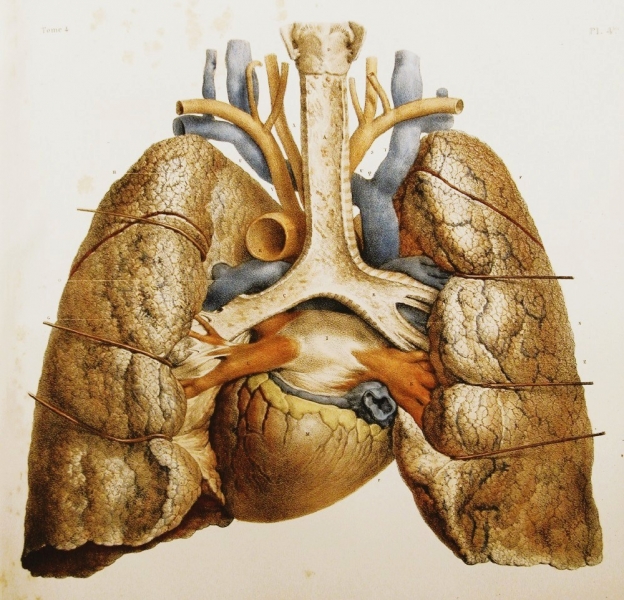 Traité complet d'anatomie de l'homme (1866-1871), 2nd ed. by Bourgery, Bernard, and Jacob
This is a wonderful illustration of the lungs and heart from the premier medical illustrated text of the nineteenth century.
, 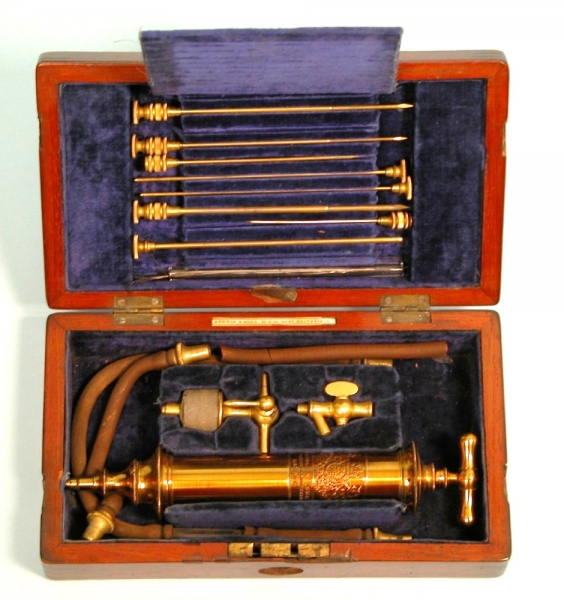 Potain’s aspirator (ca. 1880) by Arnold and Sons
Empyemia (or fluid in the chest) from tuberculosis or pneumonia was easily removed by this type of instrument.
, 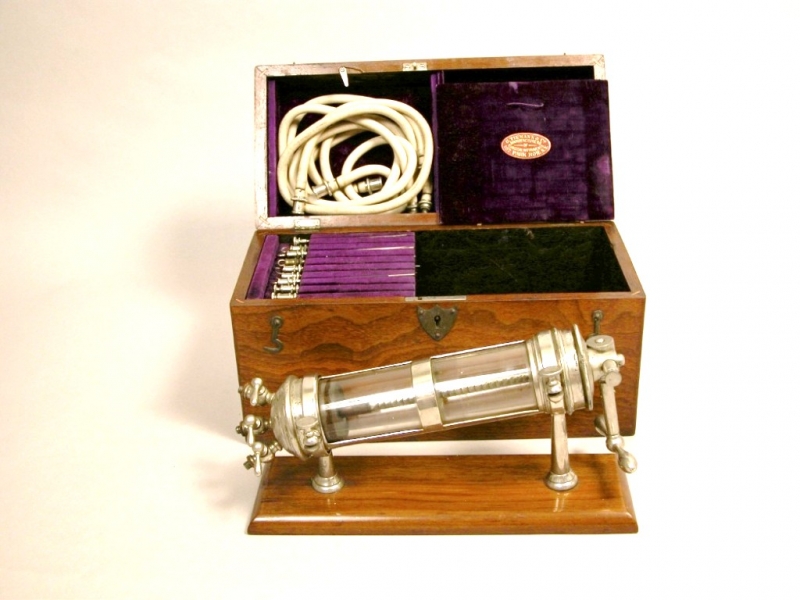 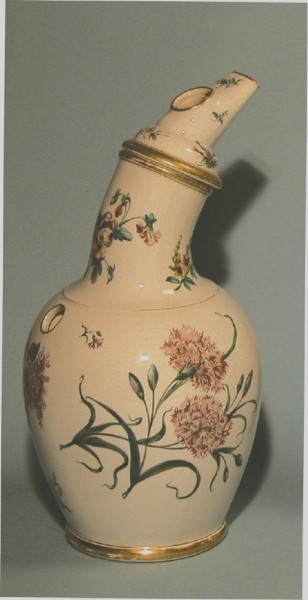 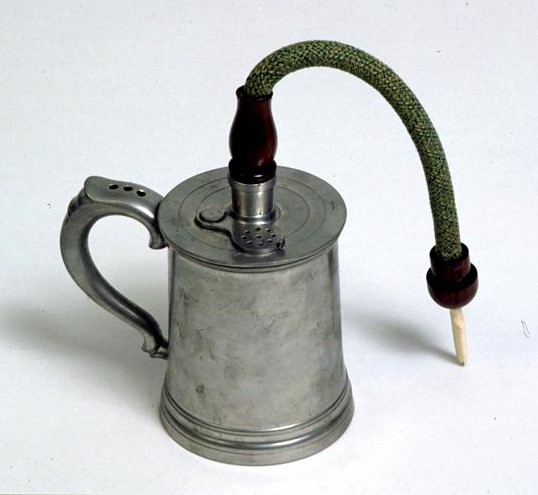 Mudge Inhaler
John Mudge was was an 18th century British physician who made the first inhaler from a beer tankard. When the discovery of ether anesthesia was made in Boston his "Mudge inhaler" was used for its application in the operating room.
, 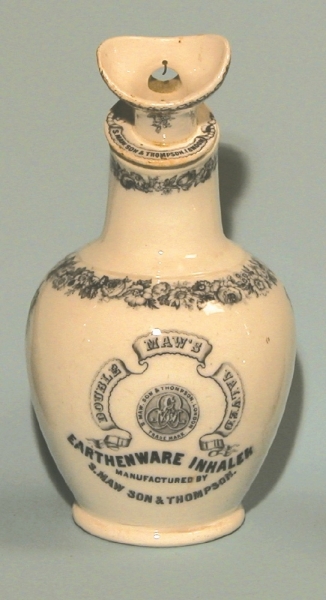 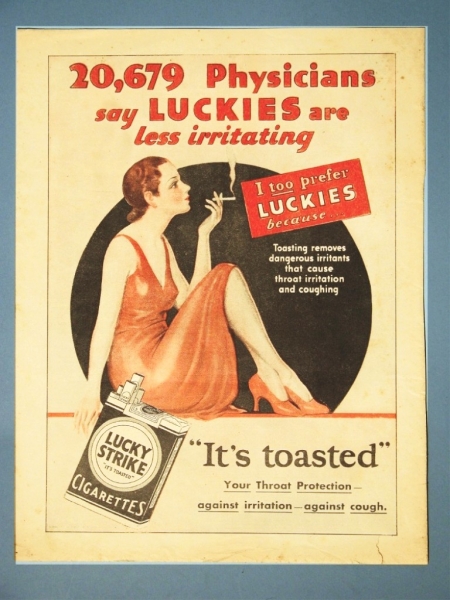 Lucky Strike cigarette advertising (1930)
American Indians were the first to use tobacco in the form of snuff and Christopher Columbus introduced it to Europe with his second voyage that ended in 1496. Tobacco use reached its zenith in the United States in the middle part of the twentieth century. There was no recognition of any danger in smoking by manufacturers who were anxious to demonstrate the safety of their products,
, 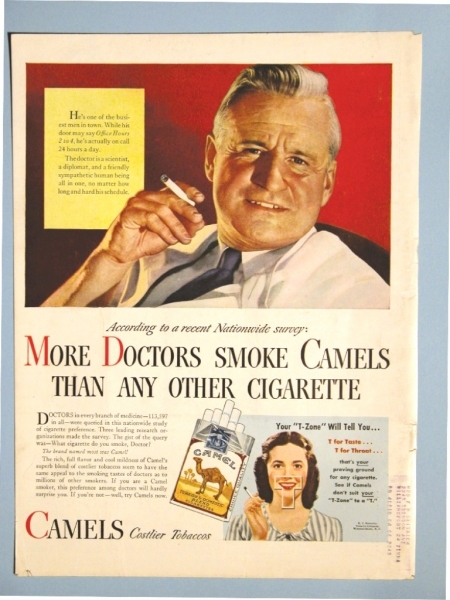 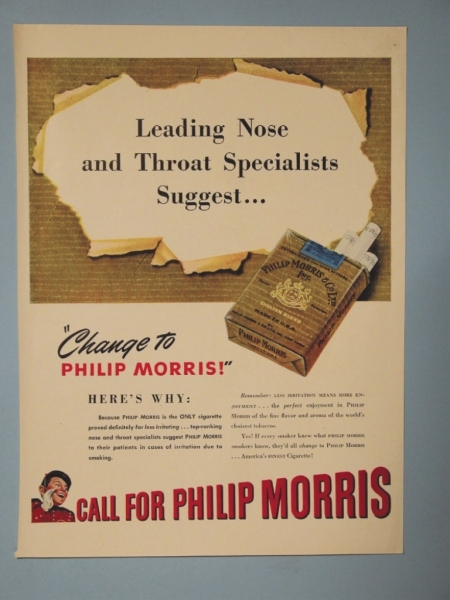 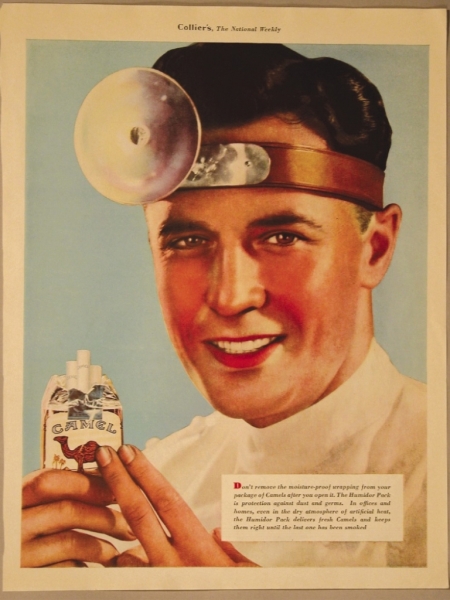 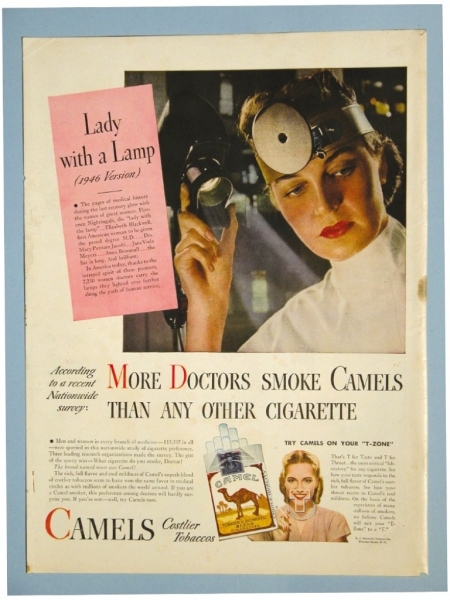 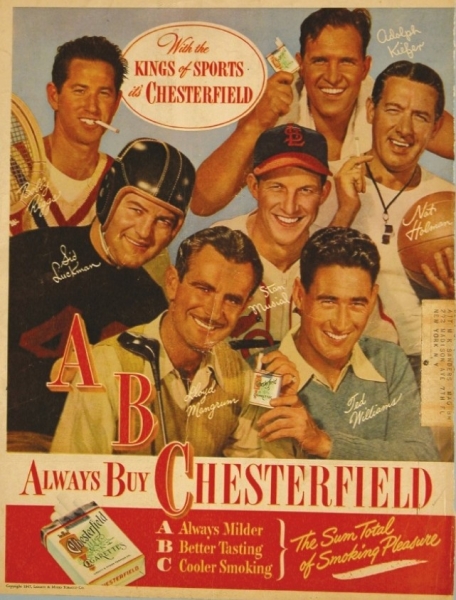 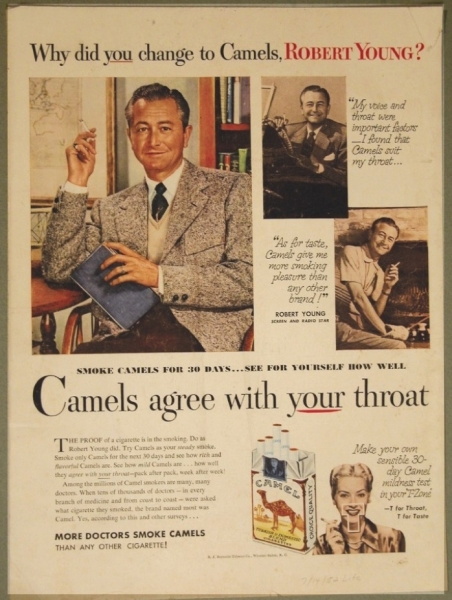 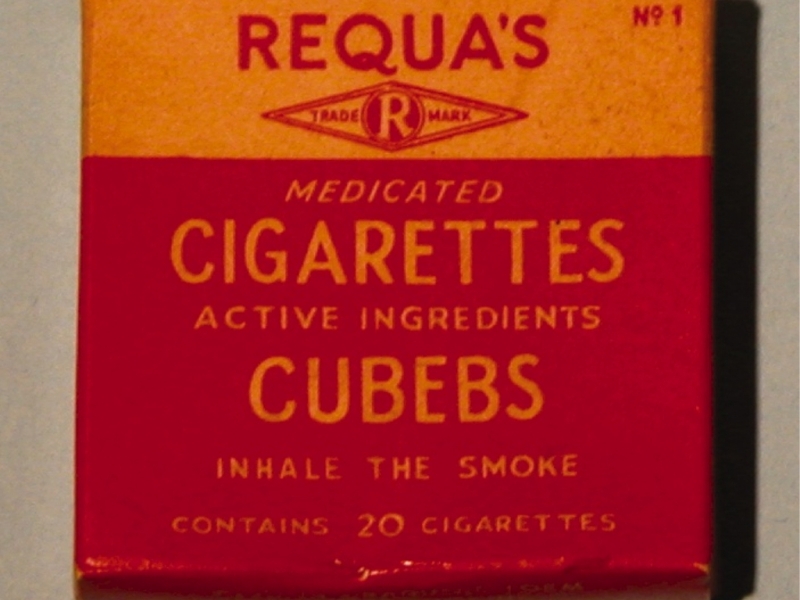 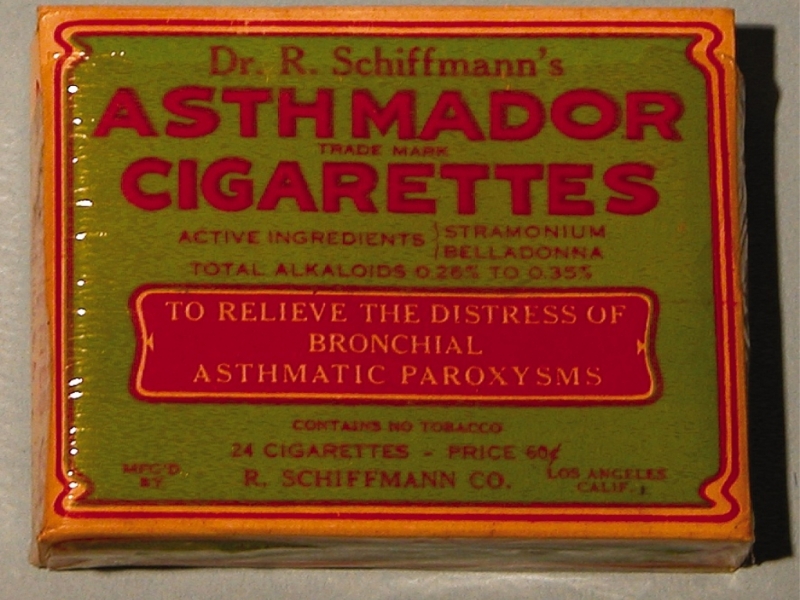 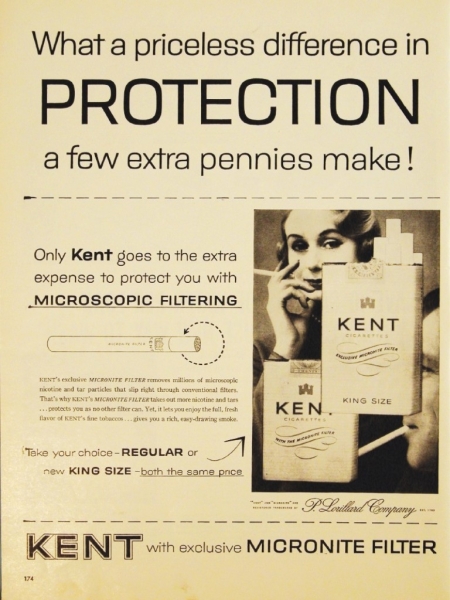 Kent micronite filter advertisement (ca. 1954)
Tobacco companies addressed the rising public concern over the potential health risks of smoking by introducing filtered cigarettes in the 1950’s. Unfortunately for the P. Lorillard Company (and for many employees and smokers), the thirteen billion Kent filtered cigarettes they produced between 1952 and 1957 contained crocidolite asbestos fibers. Thirty percent of each micronite filter manufactured for “extra protection” ironically contained a very carcinogenic material that could produce mesothelioma, a difficult to treat tumor of the lining of the lungs.
, 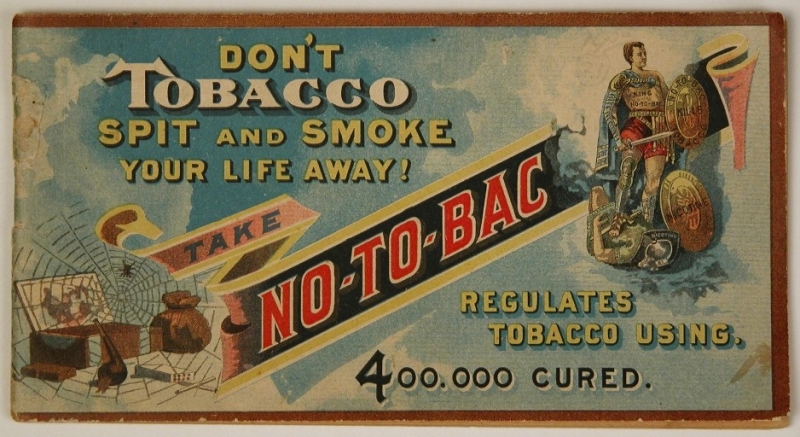 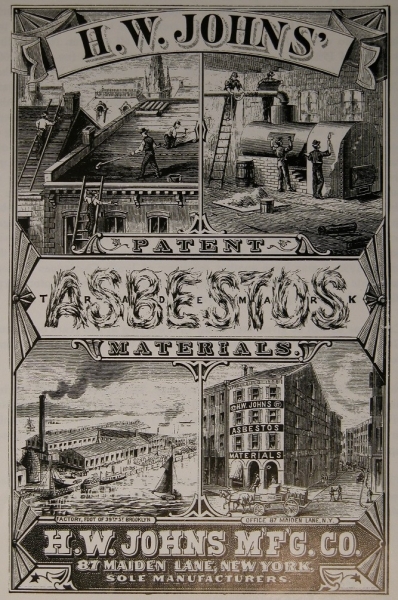 asbestos advertising, early twentieth century
Prior to recognition of the association of asbestos exposure and mesothelioma, asbestos was commonly advertised and used.
, 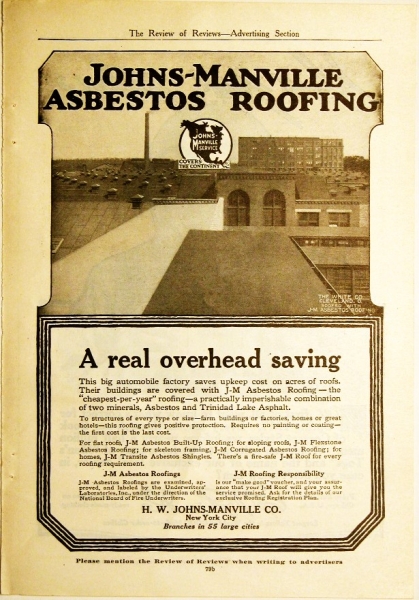 advertisiment from The Review of reviews (1917)
Infectious Diseases Gastroenterology