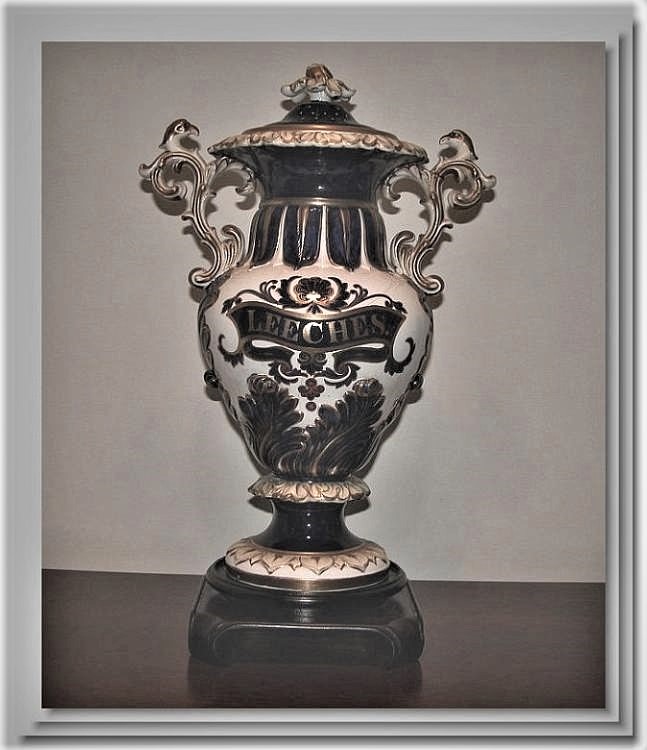 Early transfusions were based on the notion that receiving blood could be yet another way in which to help balance the humours. 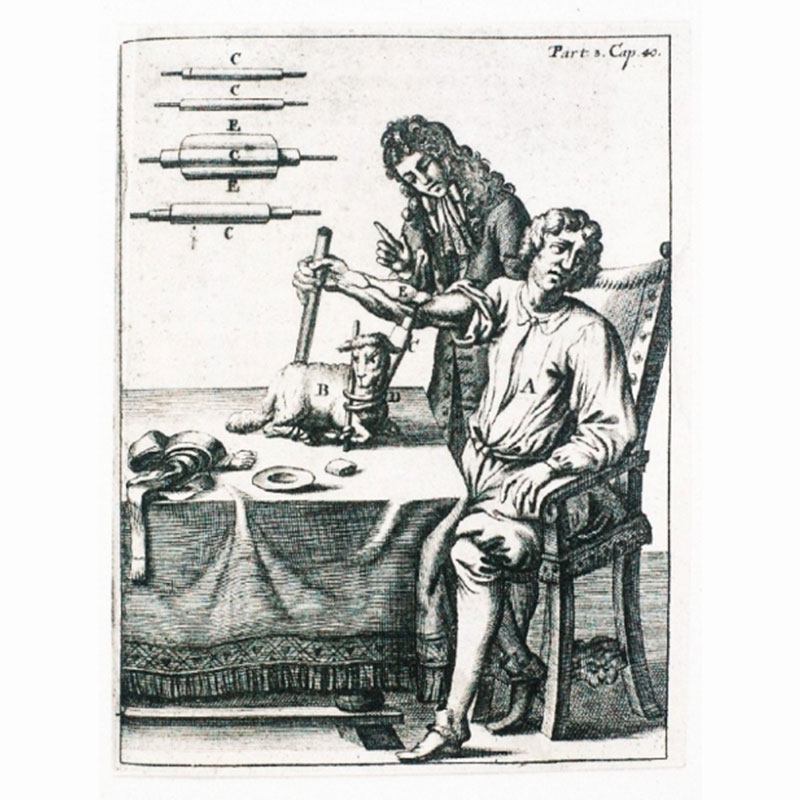 Grosser und Gantz Neugewundener Lorbeer-Krantz, Oder Wund Artzney (1705) by Matthaus Purmann
Blood had also been revered by the medical community for its curative and sometimes magical power, and some seventeenth century physicians had other goals in mind for its use based on the concept of “vitalism,” which was the belief that an individual or animal’s personality could perhaps be transferred by way of its blood. This is an illustration of a transfusion from a docile lamb to perhaps an over aggressive man.
, 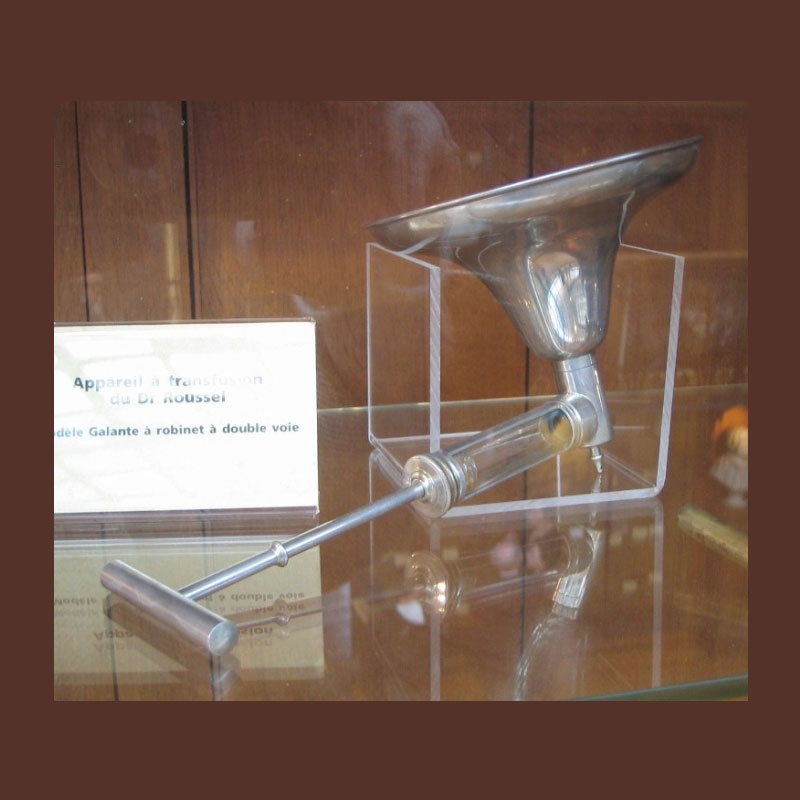 19th century transfusion apparatus by Dr. Roussel
The first recorded “transfusion” was in 1492 in Rome, and the purpose was to rejuvenate Pope Innocent VIII through the transfusion of blood from three healthy boys. Unfortunately, the three boys succumbed as did the Pope, followed by the rapid departure of the attending physician, Giacomo di San Genesio. This particular device can be viewed at the School of Medicine in Paris on dispaly in their medical museum. 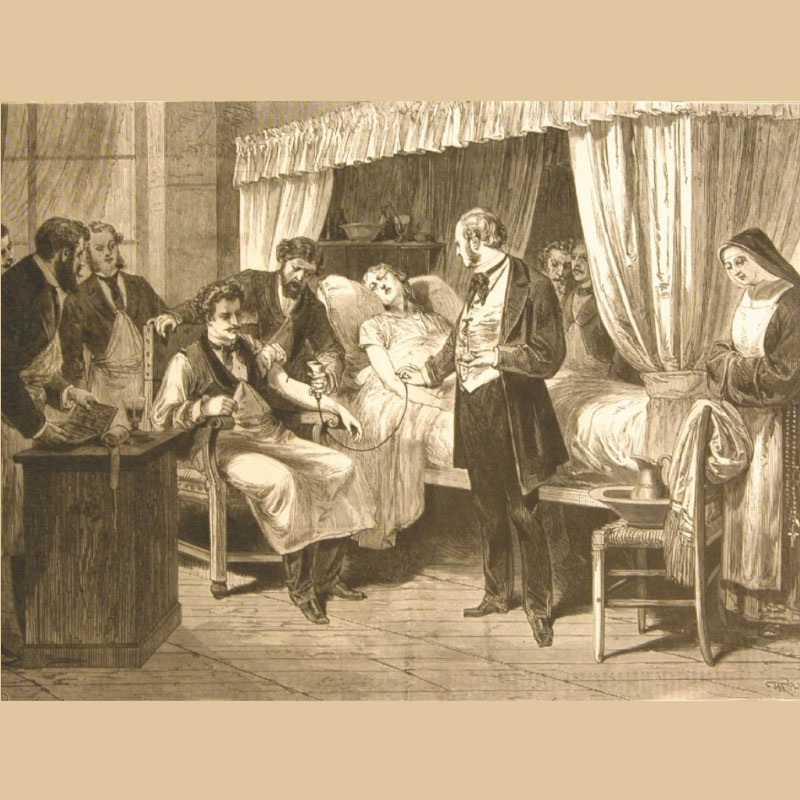 Harper's Weekly Magazine (July 4, 1874)
Illustration of a person to person transfusion in Paris.
, 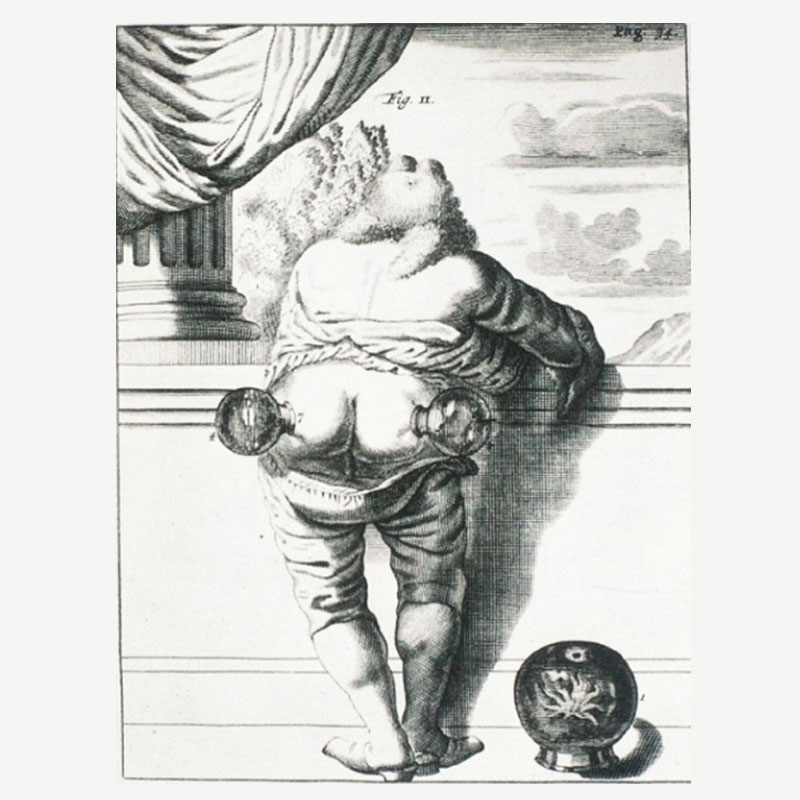 Exercitationes Practicae (1694) by Frederik Dekkers
Unfortunately physicians were rarely able to address internal problems surgically, so in addition to bleeding and purging, counter-irritation and cupping became popular in the seventeenth and eighteenth centuries to readjust the internal environment, and presumably stabilize imbalanced humours. 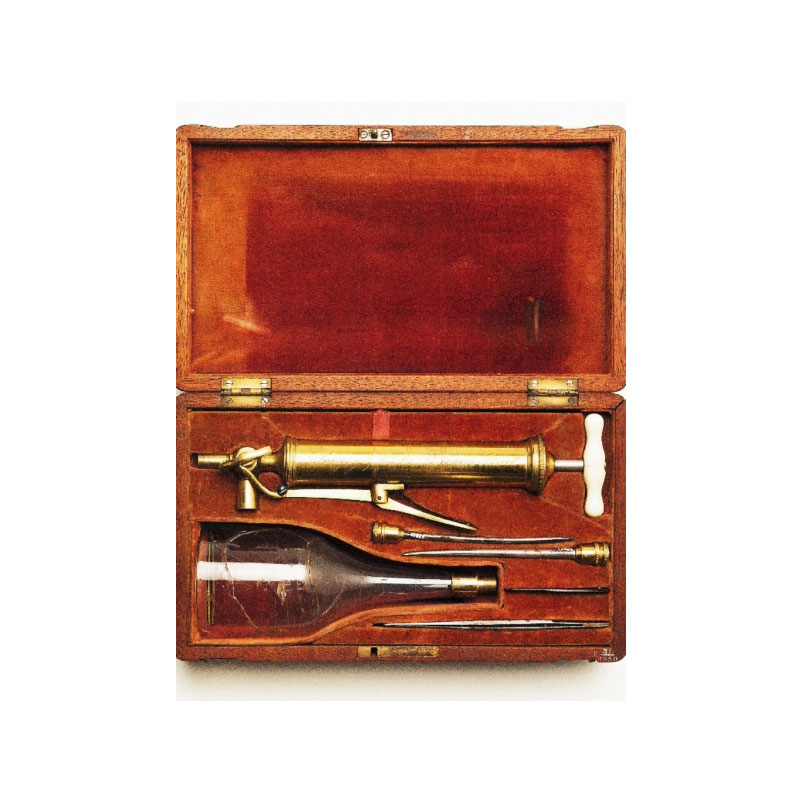 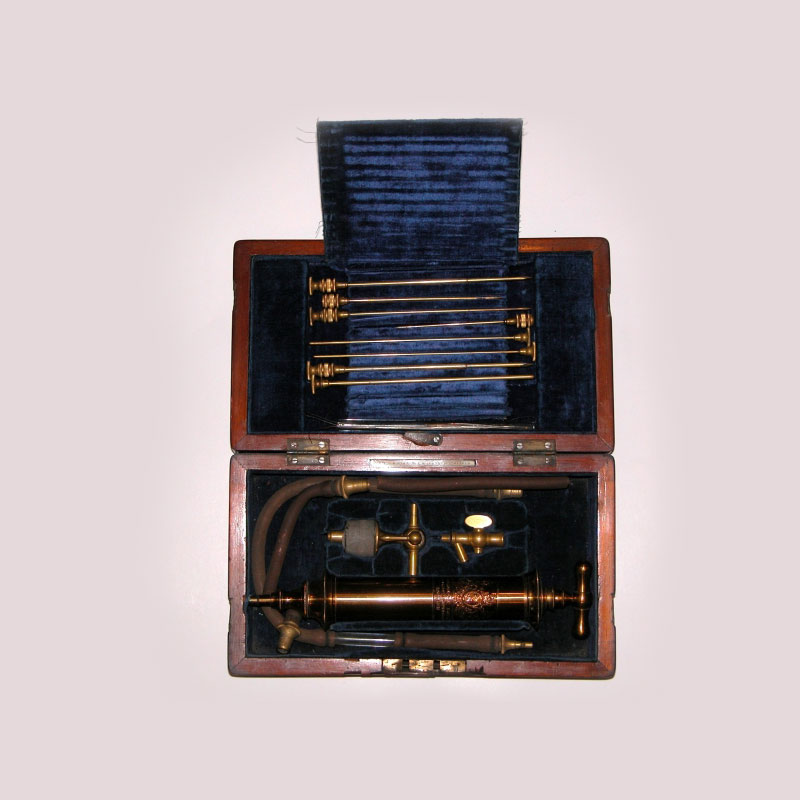 thoracoscopy/transfusion set by Arnold & Sons
This set was used for any number of purposes regarding the removal and introduction of fluids in the 19th century. 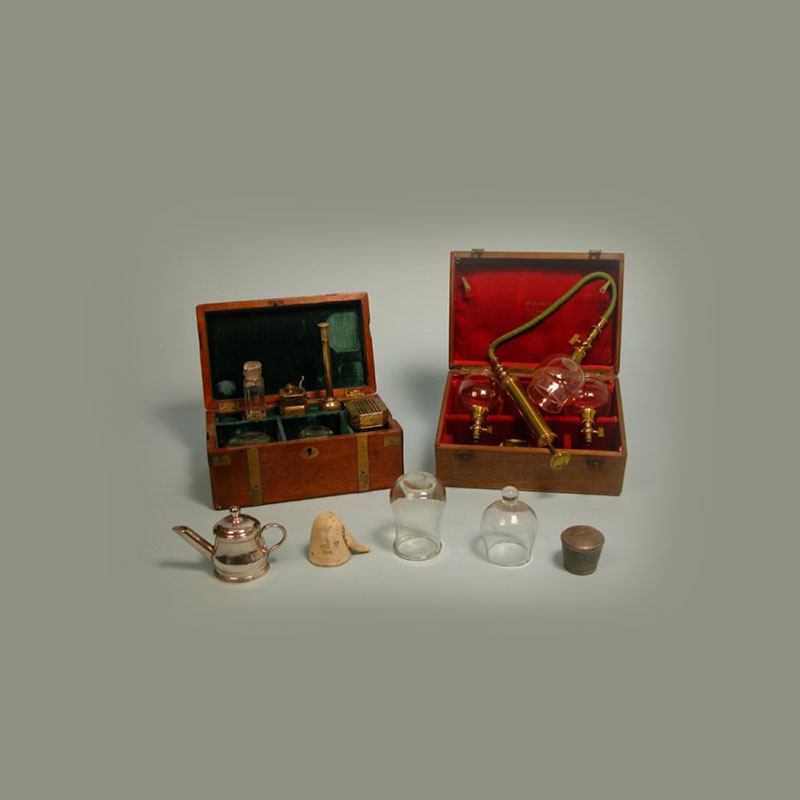 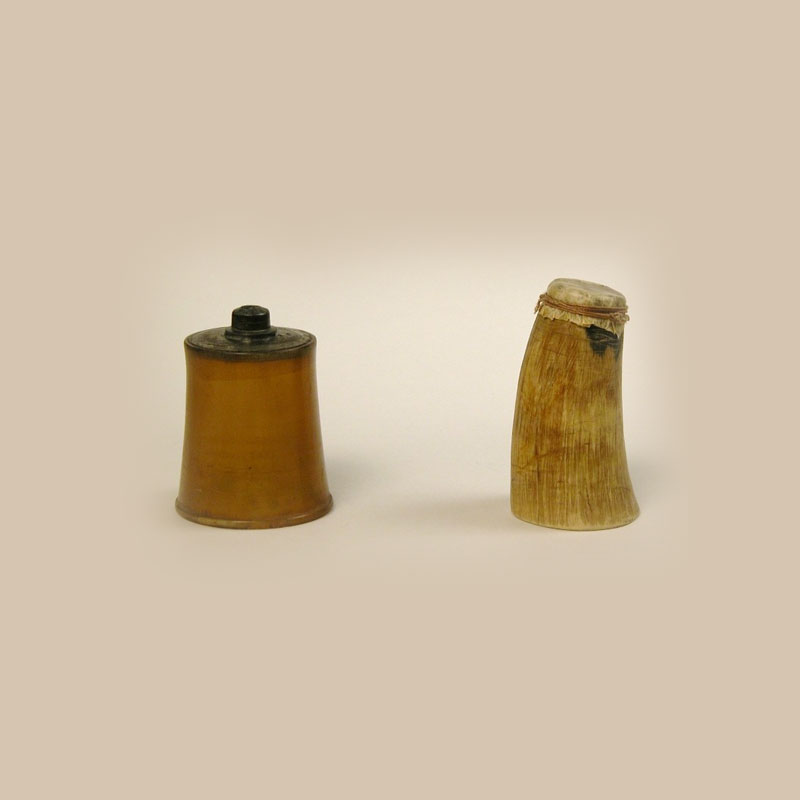 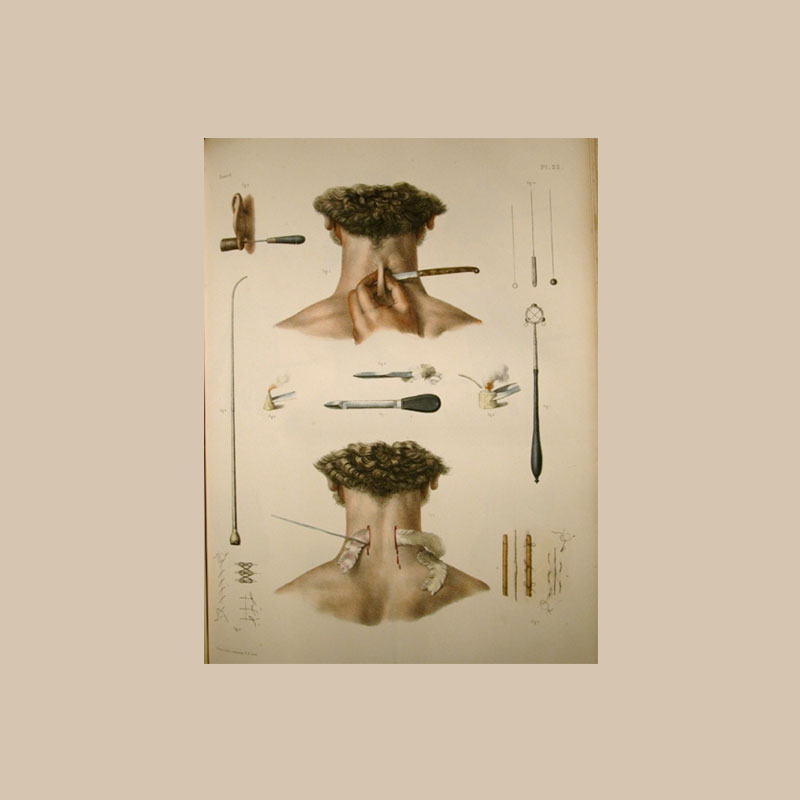 Traité Complet d'Anatomie de l'Homme (1866-1871) 2nd ed. by Bourgery, Bernard, and Jacob
Another form of counter-irritation involved the use of the seton needle, which was a lancet inserted under the skin usually behind the neck, and left there to form a draining tract. The purpose was to reduce internal inflammations and poisons by their external discharge, the area kept open to drain pus by a silk or cotton thread, and sometimes by the use of a hot cautery. 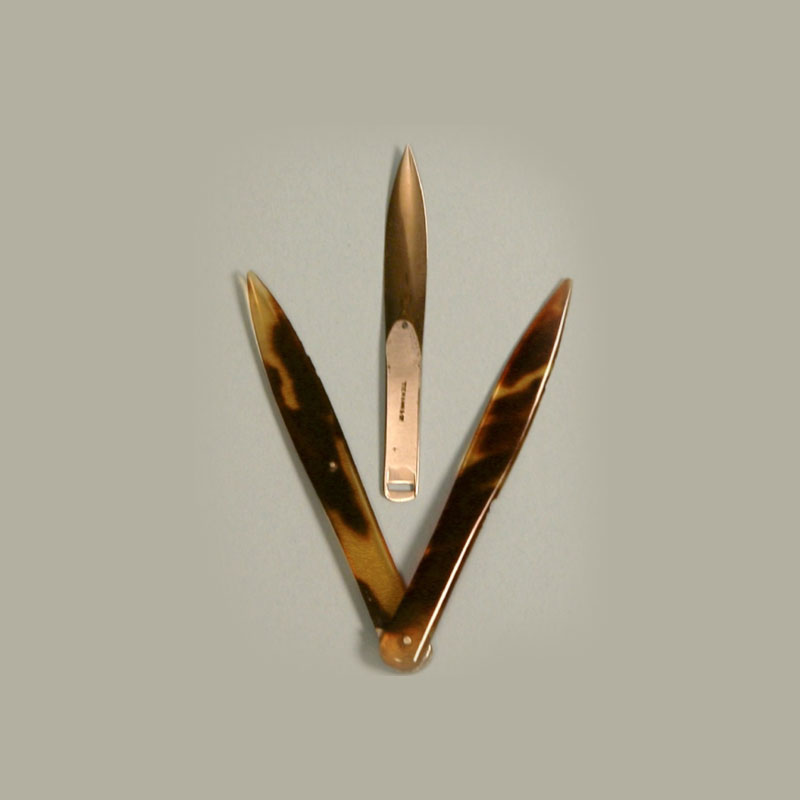 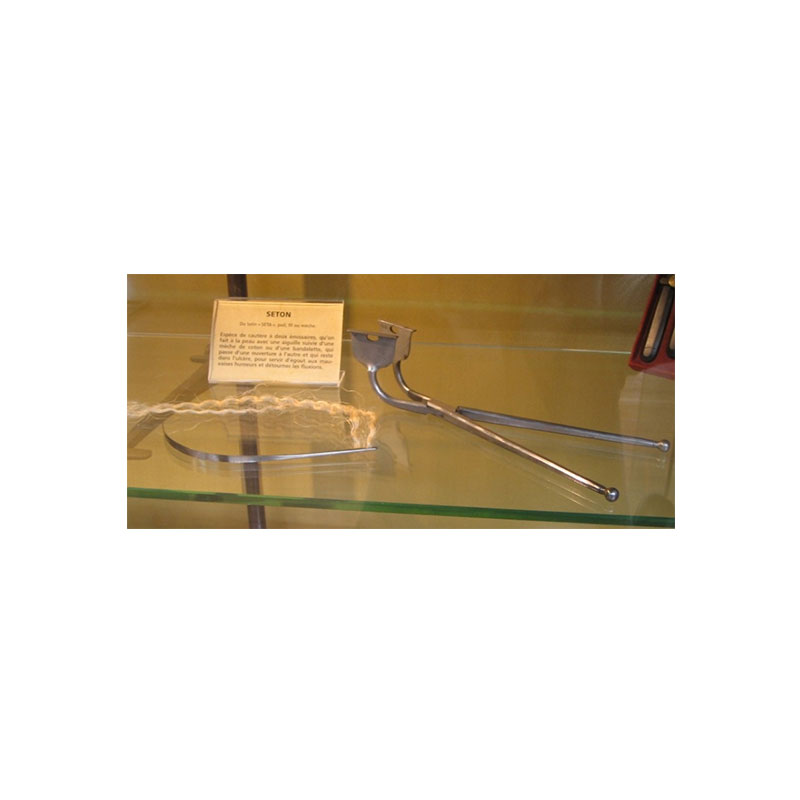 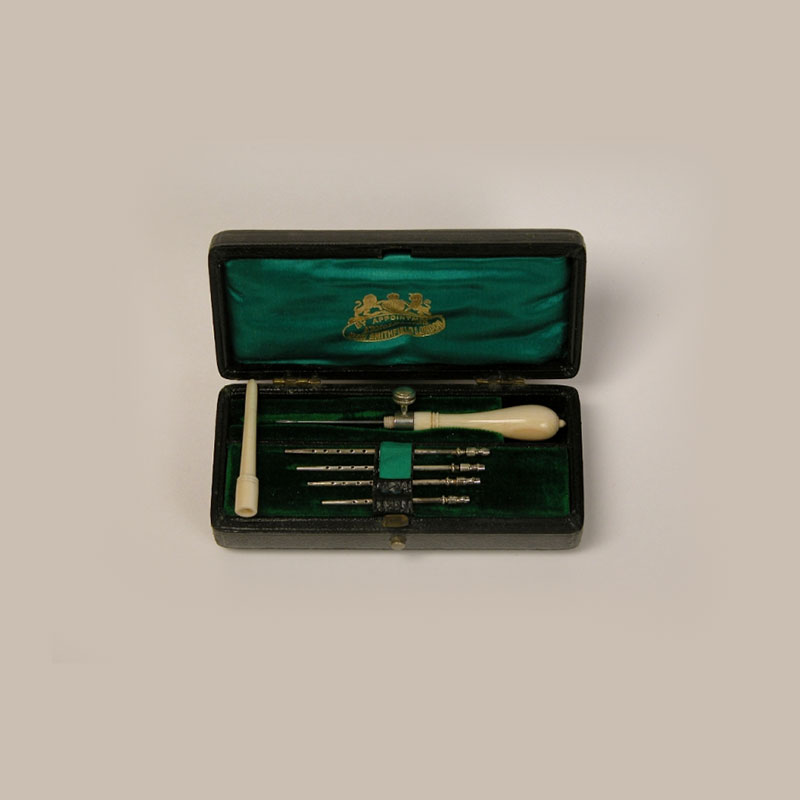 a cased Southey set
These hollow tubes were inserted into edematous areas to help remove fluid.
, 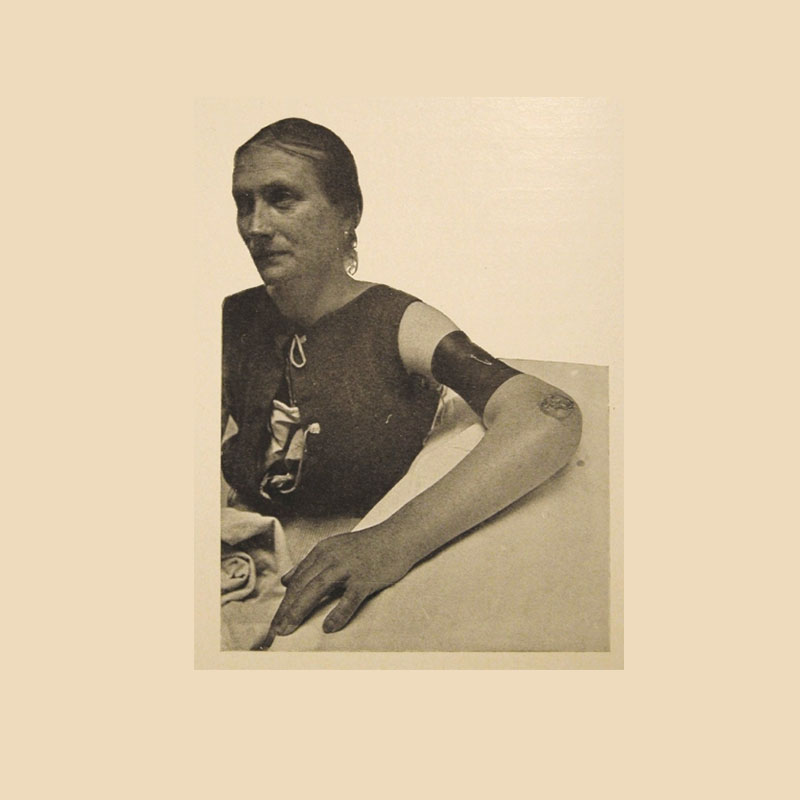 hyperemic treatment (1908) by Willy Meyer MD and Prof. Dr. Victor Schmieden
These physicians logically proposed a form of treatment that, unfortunately, was based on erroneous physiology and therefore was not therapeutic. Their (correct) conclusion was that the best way to cure infection was to increase circulation to diseased tissue. To reach that end, they advocated either the placement of a tourniquet above the affected parts to cause reddening, or the use of suction devices to increase blood to those areas of the body. This illustrates Bier’s hyperemic treatment for tuberculosis of the elbow.
, 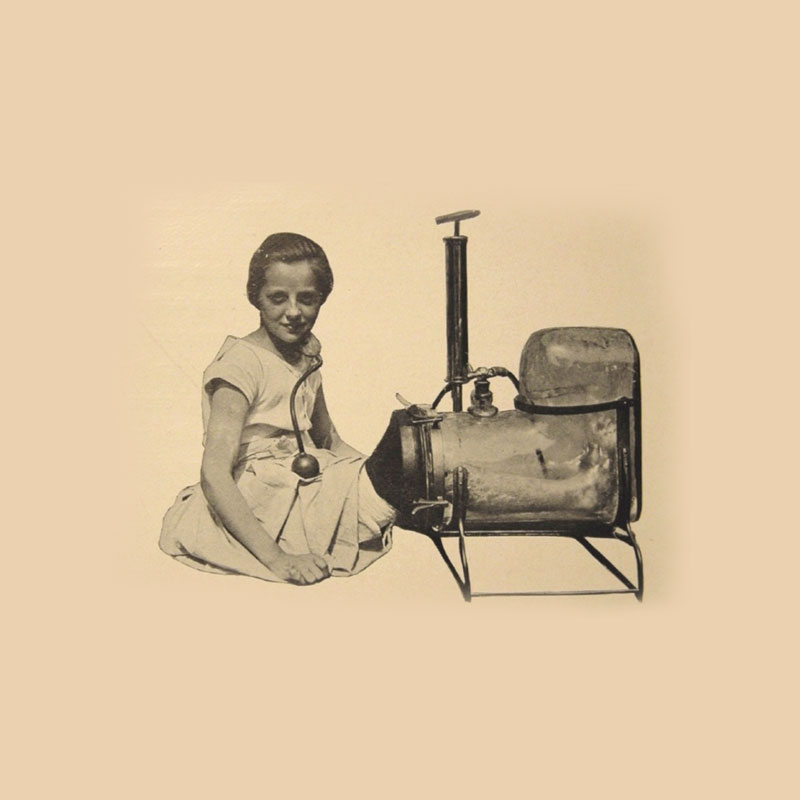